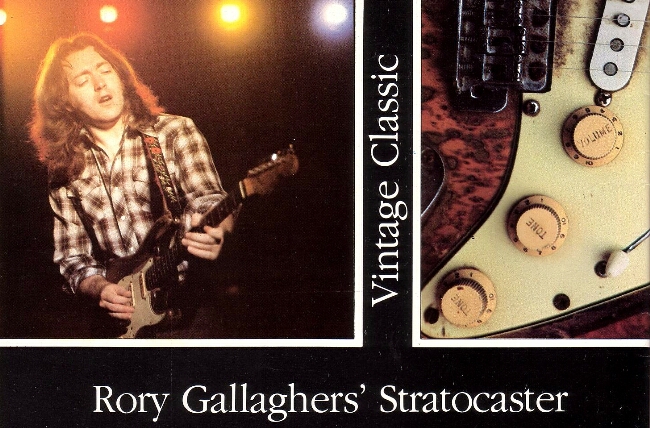 One of the hardest working guitars in the world of rock, Rory Gallagher's Stratocaster has been a familiar sight from stages all over. The man himself, with over 18 LPs to his credit, so far, is currently rehearsing for a Scandinavian tour, and will be writing and recording a new album over the summer, to be released early Autumn.

“I first saw the guitar when the guy who had it was complaining about it! He was the guitarist in a showband and he had ordered a red one. Like Hank Marvin’s Fender Strat. When it arrived, it was red sunburst, so I bought it off him. That was in 1963, but the guitar is older, it was made in November 1961. It has seen some very hard playing over the years, but I left the finish as it was. The only other one I've seen that has the same wear and tear is the one owned by Adrian Belew from King Crimson!
"I have the action set up high, not as high as an acoustic, but certainly higher than most electrics. I think it increases the sustain, and it gives chord playing a brighter and clearer edge. But all that is helped by the strings now. When I started off the only strings around were a sort of heavy medium. I had to experiment with the strings, like using the 2nd for a 3rd and so on. The only company that made strings of various gauges that would suit were Clifford Essex in London, and I carried on using them until the Fender Rock ‘n’ Roll sets were introduced, and I've been using them ever since.
The pickups have all been rewound or replaced you can't expect them to go on forever, but they try! I also changed the machines, the ones that were fitted were the small closed type, and I went through quite a few types, Kluson, Gotoh and small Schallers. Machines are a problem, and there is an argument that heavy machines alter the tone of the guitar, so I go for slightly heavier, Kluson ones.

The neck was the only area of the Strat that caused problems really, mostly through the fact that I sweat so much on stage. After a while the original neck went bad on me. That was about ten years ago, but I took it off and hung it up. After a few months it dried out and was fine again. The sweat also affects the electronics, and most of them have been replaced at one time or another. That's also where I modified the Strat. I just have the one volume and one tone, the other tone is like a master so that I can get a wah wah sound.

I've also had the fret wire changed for a much, heavier, wider fret. That means that the sustain is better. It's certainly a lively guitar, especially when it's loud. Some of that has to do with the wood; I think the body is either Alder or Ash.

I used the tremolo arm for a while after I got it, but then the arm broke, and I didn't bother to replace it. The block though was still on the springs, and I could use my hand on it. But now I just have the thing blocked up, and use other ways of getting tremolo, like lifting the strings up above the notch and so on. Everyone seems to have gone wang bar mad at the moment … probably the Eddie Van Halen thing. It's a mentality, but anyone can do it, it's just a trick on the guitar. Not that I don't like experimenting, I thought Hendrix was absolutely amazing; he pushed the boundaries so far.

As for the argument that old ones are best … I think you just have to play it. There are so many factors that are responsible for turning out a guitar, and the way that you play is really what dictates the guitar that you choose. Up to ‘65 the Stratocasters had thick necks (the replacement one I had was made around that time) and they are great, similarly, up to ‘57 they had ‘Fat Strat’ pickups so there's change all along. You choose what you want. As for ‘Post CBS’ and ‘Pre CBS’ I just don't know. There were some hard feelings when CBS really took over because small things got left off, like waxing the Telecaster pickups, and changing the nuts to plastic from ivory. They cheapened it a bit. But the woods were the same. CBS got the Fender stockpile. But when you think that Hendrix played CBS Strats … it makes the arguments a bit thin.

As for amps, I still hear the old Vox AC30 in my head, though I've experimented with Marshall 50W combos and I have a couple of old “Tweed” Fender amps that I have a go on from time to time. I've also tried some of the Ampeg combos, like the VT40 and VT22. They're great, but I do love the AC30. The only problem with it is that the stage sound is not really loud enough, especially for open air, and trying to use them as stacks just starts phase problems. In the end you just have to rely on the monitors.

The Strat and the AC30 just go together so well. That old guitar is just fine. It plays well, and it sounds … bluesy … I love it!