STRAT STORIES
by Rory Gallagher as told to Ray Hammond

Despite his protests – “I hate being dubbed as ‘hard working Rory’.” – Gallagher goes out and gets it on in country after country, month after month, leaving little time for his precious home life in Eire. He’s a guitar freak, in the true sense of the word.

“I bought that Strat when I was 15. It was a big decision for me because it cost £100 - it was a couple of years old by then and previously I’d only been playing a Rosetti Lucky 7 solid guitar. I’d joined a Showband in Cork called The Fontana Showband, and for a short while I borrowed a Colourama Solid, but the action was so high I couldn’t hold the chords down. I finally decided to buy the Strat on H.P. It was over six years and I duly made the last payment six years later.”

Being an aspiring guitar player in Southern Ireland wasn’t as easy as it was in Manchester or London in the late fifties and early sixties.

“There was no one around who could even show me the basics. There was a man who owned an ice cream shop locally and he played Hawaiian guitar. I got him to tune my first guitar up for me and then I got photographs of Lonnie Donegan and people like that and tried to figure out what shape their hands were in on the photographs.”

Despite these difficult beginnings the boy progressed rapidly, totally by ear. “Although my entire family are musical, my early life was spent performing at family parties and that sort of gathering. I only play by ear, I’ve never had any musical training at all. My one big regret is that we never had a piano at home. If we had, I’m sure I wouldn’t be so bad on the piano.”

12 or 13 years later Rory is still playing the same guitar he bought when he was 15. "I’ve got a Telecaster as well now and I have gone through periods when I’ve thought about changing my guitar, but I suppose I’m far too sentimental about the instrument. There’s also an 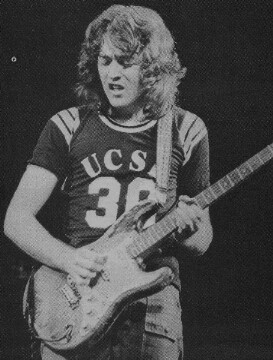 element of superstition attached to it. That Strat’s really had it. I sweat a lot when I play and over the years the body’s absorbed a lot of moisture. I’ve often thought that it’s come to the end of its life. Recently two pick ups packed up together, they just cut out when I was playing. I was terrified that I wouldn’t be able to get new pick-ups to sound the same, but fortunately they matched perfectly."

“I’ve always wanted to get that Gibson sustain out of my Fender. I’ve borrowed Gibsons and tried them, you get the sustain, but you can never get that clarity of sound that you get with a Strat. The controls seem all wrong to me on a Gibson as well. When I play one I’m looking for the controls and I discover that they’re way below my hand and that I’m lifting the guitar up to reach the controls. I like to get that sort of phase sound by using the volume swell on the Stratocaster which I’m playing as well, and that’s impossible on a Gibson. I use a Rangemaster treble boost unit on stage to give me a lift and sustain effect and I find that it comp­ensates perfectly.

“I’m using Fender Rock and Roll strings at the moment. I’ve been with them for some time because you can get them easily anywhere in the world and they perform very well. I’ve tried Ernie Ball strings and I used Clifford Essex Strings for quite some time, but I’m fairly settled now with Fenders.

“Talking about that guitar, I’m amazed that despite its age I’ve never even had to adjust the truss rod. I’ve taken it to the hottest countries in the world and it just never moves, it’s great I’ve had it re fretted a couple of times but apart from that very little’s been done.

“I had it stolen one time and it got very beaten up then. I had borrowed a Telecaster for a short while and both the Strat and the Tele were nicked. I was terrified for a few days in case I would have to buy both a Strat and a Telecaster. Both guitars were found after a few days in a front garden with the strings missing and the bodies knocked about, but thankfully they were O.K.”

Rory uses a Fender Bassman through four 15” speakers on stage. His old love, however is an AC30.

“I still use the old AC30 that I carried about with me for six years. It’s a great amp and it gives me so much power.”

Rory plays guitar every day. That may sound fairly commonplace, but it’s not for an artist that is working every other day. The obvious deduction is that he still loves the instrument.

“I play all sorts of things when I’m at home. I rarely play things that we do on stage, simply because I know them so well. I can play some jazz and I’m trying to improve my finger picking technique. I’m not at all happy with my finger picking efforts. I suppose it’s because I’ve been playing flat pick style for so long. I’m O.K. using a flat pick and my fingers but using my thumb and fingers separately isn’t so easy. I’m hoping to take some classical guitar lessons when I get the time.”

Getting the time is something that Rory has trouble with. Why does he tour so much?

“I think it’s a form of discipline in itself. I think I’d get terrible lazy if I took a year off or something like that. I’d start following the business through the music press or through people telling me things and that’s not always a true picture of what’s going on.... you only really find out when you’re playing. I suppose I grew up believing in people who were traveling players. I’d be happy just to be a player going around in the back of a Volkswagon van if I could ,you know, the hobo musician.

“Things have changed. Today you’ve got to be far more organized and look after schedules and things like that. I had a very hard time for years and years when I just couldn’t get enough gigs. I used to be very frustrated by the lack of gigs and the lack of audiences rather than being frustrated at the lack of success. The nicest thing that success has brought me is plenty of work.”

Rory has become an international star in the true sense of the word. He started this year with an incredibly successful tour of Japan and he’s touring all over Europe (including a British tour) before summer. On the record scene he’s consistently a big seller, especially in the U.S., but it’s in this area that he feels there’s room for improvement.

“I would like to sell more records. I think it’s a question of a better relationship between me and the record company, you know, finding out the best way I can aid sales of a part­icular album and so on.”

It’s in the studio that Rory admits that something is missing.

“I think we’ve got to make a definitive studio album. I record things at home on a small cassette player, but even then I’m conscious of the tape being on and I’m never happy that the best goes on tape. Whenever we go in to make an album, we’re always playing the track so much better three weeks later that it’s a shame it’s already recorded. I suppose more recording time would help, but the real thing would be to get a mobile at home and relax properly and spend a lot of time getting it right.”

Many players complain that traveling and heavy tour schedules destroy their development on their chosen instrument. The tiredness and the boredom take their toll.

“I’ve been very happy with the way my playing has developed, if that’s not being too modest. I’ve got into using a lot of different tunings and I’ve also developed my slide playing considerably. I’ve been playing slide for some time, but it’s only comparatively recently that I’ve started using bottleneck on a standard tuning. You have to develop a completely different technique to get things going and I really find it very stimulating. I also use lots of different tunings, E, A, B and so on, and one of my favorites is to tune to open D leaving the G string at G. It produces a really nice drone. I think the drone is something that I’d really like to add to a guitar. If you can imagine a pipe drone going along behind a melody, I think that would be great.”