Whatta name, huh? Rory Gallagher. Almost sounds like the streetsaint kid boxer in all those countless sleaze epics of the past couple of decades, punchy before his prime, who loses his mouthpiece in a shower of sweat and teeth halfway through the fight to a terrific left hook from some gorilla-hulk, proceeds to eat fist round after round ad nauseam until the gore is like Niagara pouring down his busted mug and is decked so many times (Look! That’s Peg out there, ain’t it?) ya begin to wonder is this a ring or a time-warp trampoline vacillating between methedrine and molasses mentalities? 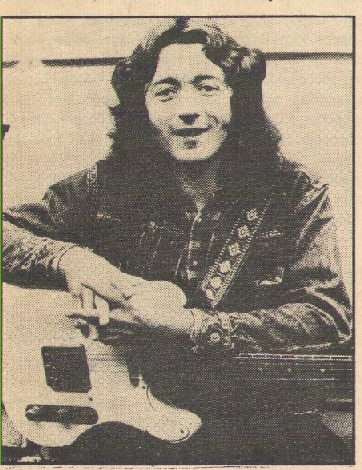 The guy that used to play Dobie Gillis’ old man is hysterical in the corner; he’s on the verge of tears in his three-sizes too-small sweatshirt with “The Kid” on the back in the bowling alley embroidery and screaming at the Kid to go down and stay down and don’t try to be no friggin’ hero ‘cause yer gonna get killed for sure, the Kid doesn’t even see him, let alone hear him, all he knows is that somewhere out there is Peg, God love her, and somehow he comes alive, he’s swinging wildly, insanely, fighting on sheer will and heavy-duty Hollywood guts, spittle and blood flying through the air like spilled minestrone, staggering like a tightrope artist on a soper jag, miraculously keeping his balance, actually landing some desperate punches now, yes, a big right cross, another one, a left, another left!  A combination! An uppercut rocks the champ against the ropes, a left, a right, another right to the solar plexus! Jeezus! The champ is hurt!

The Kid looks out into the crowd, exhausted, but exultant, knowing that the Big Punch is still there….but Peg is gone (quick burst of super-realization-if-how-fucked-up-everything is type of music). Well, the champ shakes off his daze and ends up chopping the living shit outta the Kid who ends up looking like a damp Kleenex somebody had a bloody nose on in the middle of the ring.

Rory Gallagher is not a chump, not yet, but another album as depressingly anti-creative as Blueprint and it’ll be time to hang up the gloves for good. How could have fronted such a progressive group as taste( who did material at least four or five years back that could stand up easy right now) and decide to devote himself to de blooze again mama seems like a hell of a waste of his considerable talents as a rock’n’roll instrumentalist (there never was a voice) songwriter. Glam-rock or sham-rock, when a fave rave is going down the tubes it’s a throb in the wrong place