NO SMOKE –NO MASCARA –NO HYPE!

From the Sweeping of Brush, which is a collection of worthy quotes from Ben Shiels,
I give you the following.

“The reason great people are so humble is because deep down in their hearts
they have a sneaky suspicion they really are great.” 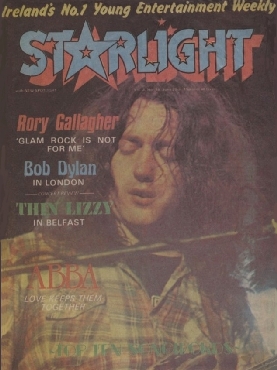 RORY Gallagher fits the bill perfectly.  His modesty is at times almost embarrassing, but never affected.  Whatever moves he makes are made for the right reasons rather than for the sake of change, publicity or whatever makes a showbiz life last longer.  Dropping Rod d’Ath and Lou Martin from his band and going to a 3-piece is such a move.  I thought he thought he had done it as a reaction against the music becoming too big for the blues, but he told me I wrong.

“Obviously there is some little thing inside me which makes me want to go back to just my guitar.  I’m not averse to another guitar and maybe keyboards.  I just think it was time to have a bit of a change.

Are you saying that you feel there is the need for a more sparse approach to music, with less resort to dry ice and lasers?

“I think there is, even on records.  Everyone was using a lot of synthesizers and things, not that there’s anything wrong with that, but I think the punk thing was a great reaction against that and the more healthy aspect of the punk and new wave thing is that there is more club work, the synthesizers were getting out of hand, but punk got bingo out of the halls and the clubs and got more ‘live’ bands in.”

You are very much into producing your own records now, very conscious of recording what you want.  Why so?

“In days gone by, I used other producers on my albums.  In fact, the last couple of times I had a producer, but it wasn’t what I needed and I don’t think it really worked.  A lot depends on the right mood and the right engineer.  It’s not that I’m anti-producer, but sometimes there is so much aggression that you need to put it down without discussion.”

But isn’t there a danger that a man can become deaf to his own failings and weaknesses?

“That was something I gave way to and that’s why I got the producer, because someone else can say ‘that was a better take than the last one’, or whatever.  But I think if you’re a singer who hasn’t got material and who isn’t used to singing into a mike in a studio, then a producer is right.  Or if you want to change everything round, a producer is right.”

Would Leo Sayer moving to Richard Perry be the kind of example you mean?

“Yes.  That’s a good example of giving a guy a whole new bag of tricks.  I could never imagine that happening to me.”

“I want to keep my records fairly sparse, but with good quality.  It won’t sound like it was made in a garage and I know that I’ll have other musicians who will provide other sounds and hear other things that will help me.”

“Besides, there is movement back to three piece bands.  There’s a new guy call George Thorogood emerging.  He plays slide guitar.  And look at The Pirates.  It’s just good old r & b with a twist.  I just kept on playing what I felt and resisted the panic to try and keep up with the Bryan Ferrys or run out and buy mascara.  I just kept on a steady course.”

Do you feel you kept the options open for a lot of bands, by staying at the top as an r & b artist?

“I hope I contributed a little bit.  I can’t make a big statement and say I’m the last relic or the savior of blues or rock.  And remember, I’m trying to progress myself all the time.  The only thing I haven’t changed is the heart of the music.”

R & B by its very nature tends to impose limits on how far you can push the boundaries musically and lyrically.  Hasn’t it become hard to keep writing in one style after all these years?

“Oddly enough no, I agree with what you say, but I’m glad it hasn’t affected me.  Within the framework I have to keep looking for new stories alright, but by the same token, there are so many echoes of the 50s in Bruce Springsteen.  If you write a song that mentions a Chevy or a Cadillac, that is basically old r & b, but now one year it’s r & b, the next futuristic, the next nostalgic and then it’s boogie?”

“Elvis Costello is great, but again there are echoes of Connie James and Bobby Vee, little touches of Little Richard and Dave Clark.  I’m not saying it’s wrong or that he’s ripping them off.  It’s just that unconsciously these good little things have been included in today’s music.”

Is Macroom going to be the annual trip to Mecca for you and so many more or do you treat it as just another gig?

“I try and detach myself from it and treat it as another gig, and go out to give it the full lash, but obviously I like being back at home.  But I don’t have a Marian year complex about it or anything.”

“There will be an amount of pressure there and if I don’t come up with the goods on the day, they’ll let me know.  There is always an element there who have the attitude “show us what you can do” and the whole thing is kind of ritual.  I’m not guaranteed a warm reception but if you get it, it really gets you off the ground.  Last year it went so well and this year I hope the weather is good.”

From the June 29, 1978 issue of STARLIGHT (Irish Entertainment weekly)
Thanks to Dino McGartland for passing this article along to Brenda O'Brien and to Brenda for typing and sharing it!
reformatted by roryfan