I was very sad to hear of the death of Rory Gallagher. I produced the album, Calling Card by Rory Gallagher in  1976, but I knew him before that. When he was Taste, he supported DP quite a few times in the early 70s, then, as just Rory Gallagher, he did at least two long US tours with us. In those days it was normal to have three acts on the bill, he opened, then Fleetwood Mac, then us. There was no 'show business' about Rory - he didn't worry about looks, clothes, image etc., his battered Strat said all he had to say to the world. I got to know him better when we recorded Calling Card at Musicland Studios in Munich. The band were a very tightly knit group and all unswervingly loyal to Rory. 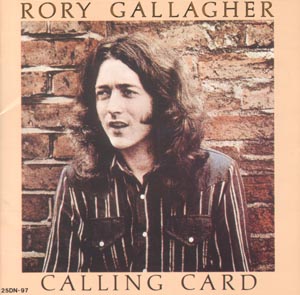 There was an innocence about him that belied his devilish sense of humour, so he could often catch people off guard, but he bore no malice towards anyone. During the recording in Munich, the Rolling Stones, who'd previously recorded Black and Blue there, called and inquired whether they could come down the studio with their support band The Meters, and jam the night away. They were on tour. Rory asked my opinion and I explained that since we'd spent long time getting the sound right, I wasn't that happy about changing the studio around, even for the Stones. He agreed, then thought about it and changed his mind, wanting to accommodate the Stones. Just as I was about to call them and tell them it was OK, he changed his mind again. We spent hours discussing it, he was so keen to help out. In the end, we decided to let them come, and accordingly organized the studio so that our set-up would be preserved as much as possible. They didn't come. (We did go to see them though.)