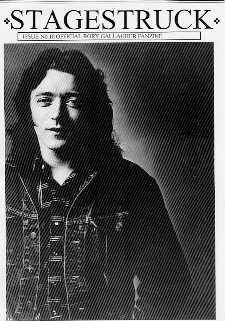 During a recent interview with Donal, I decided to put some questions to him regarding the Irish Tour'74 film which is now available on video and DVD. Here's what he had to say.

DMcG: First of all Irish Tour'74 is now available on video and DVD.
What took it so long?
Donal Gallagher: Simply, in it's day, it was made for the cinema. Commercial rock videos didn't come into being until the end of the Seventies really and by then Rory had changed the line-up anyway. Other factors were that the company who were distributing couldn't get it distributed properly. Also the prints they had were, one was fire damaged and on the other print, the sprockets on the reel were worn badly.Other copies that they had at Polydor,contained a version of Tattoo'd Lady, which was edited out and sent to other parts of Europe as promo clips. We tried to trace other copies in France and from other people who we thought may have had a copy, but with no luck. So we put it on the "back burner". With subsequent changes to Rory's band line-up over the years, Rory felt that he had moved on from all that. We would have wanted to do a newer documentary of Rory anyway. Tony Palmer turned up after Rory's memorial in London and gave me the news that there had been a safety copy of Irish Tour in a laboratory in Wardour Street,London.

DMcG:What kind of process did the original tape have to go through before it was    put onto video / DVD?
D.G. First of all it had to be digitised, particularily for the DVD version. The video was still in analog form. It was given to Abbey Road Studios who specialised in that type of thing and they worked on the sound. But I still wasn't happy with it when it came back. lt sounded like it was too "high tec".I preferred that type of "vinyl" sound. The real problems with the sound came at the start when we were filming. The tour itself ran Belfast-Dublin and then Cork. We had hired Ronnie Lane's Mobile for the tour, but they failed to turn up in Belfast,and they never turned up in Dublin.lt finally arrived for the Cork gigs. So what you had was some tracks recorded on multi-track on the mobile, but the majority of the film had been done from the mixing deck that I was using-a 12 channel STRAMP mixing desk. You can hear the feedback on "As The Crow Flies! !"So it was entirely live. So I've brought in Tony Arnold to have a crack at it. With the DVD version I was keen to put on the 5.1 surround sound. Tony,by now,was very familiar with all Rory's tracks and what requirements I would make up.He took the original audio on the film and transferred that, improved it onto analog state,then transferred to computer at the last stage. This then went to DAT and we gave it back to Abbey Rd studios who finished it off. (Review of Irish Tour'74 DVD in "WHICH DVD" magazine. )

During the course of the interview we spoke of the technology available now and how a meeting Donal had with a friend at BMG led to them releasing Cream's farewell concert at the Royal Albert Hall.

Donal:There were actually two concerts given in the one day.One of which was a matinee and both were filmed. The support act was Taste and it was Tony Palmer who actually filmed the whole event.

So I asked Donal the $64,000 question. ..Is there footage of the Taste gig at the Albert Hall with Cream?? According to Donal, someone may have the film tapes somewhere, but he hasn't seen them.But they are out there somewhere! ! !

Going back I mentioned the folk / acoustic album to him and what's happening on that front.

Donal:BMG have been going through a lot of personell changes with staff etc. I felt with the timing,many new people had been brought in to replace the people I'd been working with.I felt it premature to give them an album when they weren't acquainted with the material. I was afraid the release may suffer and not get the attention it deserves. It's a brand new album and it has to be marketed in an entirely different way. lt's one of the principal reasons why I held back. In
addition, we're still waiting on some of the musicians who are contributing to the album to get tapes back to him. I have to respect that they're on tour or that they have their own album to promote etc etc.

DMcG: Will there be new material on the album?
DG:Yes!!
I was quite annoyed that some web sites had got info from BMG that was not to be made public.And some music press were advertising it as a double album. Iwasn't putting it to BMG as a double album.My intentions are for a single album/CD with a seperate bonus CD, with Rory giving a "masterclass" on the acoustic. I was very angry at false information being leeked out. It's wrong and several working titles have also been used. I appreciate people are always anxious to get news, but it doesn't help.I rang one company,CD Express and I enquired "when could I have a copy" the guy said "anyday now" and I said "I'd be keen to hear it as we haven't made it yet!!"I said to him I'd be delighted to get a copy,to hear what I'm making.

We then went on to speak about the Internet and it's potential.

D.G:I'm aware of the Net and it's potential etc for downloading and copying.It's something I have to give a lot of thought to.It's fully my intention to get a Rory site (as we speak it's being designed) operational.Having looked at the other sites myself,I wanted to make a site that people would visit quite often. The newer technology of flash and 3 dimension, and make it an inventive and novel site.My learning curve has been off the back of the Formula 1 Grand Prix site which some people may want to look at because there is a credit to Rory somewhere on it. The webmaster for that site is a very experienced webmaster and you can see the type of design I have in mind.

As regards T -shirts, I felt very awkward selling T -shirts up to now,but I'm aware of other people illegally selling T:.shirts. We will establish our copyright and open up and sell material on the internet via a shopping basket.Items for sale will have their own tracking number and you can trace your package to see if it's enroute,or delayed or whatever. I'd also like to offer in the shop "vinyl pressings for fans into vinyl. One idea is to go on line and remix a Rory album by yourself i.e remix Photofinish.

So there it is folks,an insight into what Donal has in plan for the future and hopefully people can be patient enough to see the "big picture". There seems to be lots more that can be and will be done to keep Rory 's name alive in the future, so lets give Donal the valued support he needs.


The Formula 1 site Donal refers to can be found at http://www.f1grandprixracing.com/

Dino McGartland's interview with Donal Gallagher comes from the Stagestruck issue #10 released in June 2001. Many thanks to Dino for allowing me to share it.! Stagestruck is an excellent publication ......let's support Dino is keeping it rolling!
Ordering information can be found at  http://www.roryon.com/stagestruck.html

article reformatted by roryfan
photo is the cover of Stagestruck #10