RORY GALLAGHER takes to the bottleneck 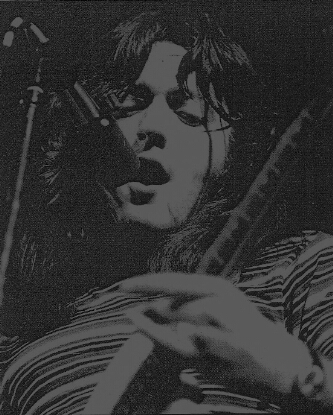 RISH RORY sounded a little upset over the transatlantic telephone. Decca are about to resurrect some ancient Gallag­her recordings from the archives and the guitarist is not pleased at all.

Rory Gallagher isn’t the first in musician by any means to find himself in this predica­ment of having no control of material released under his name.  The recordings about to be released were made by Gal­lagher years ago in Ireland before he had even formed the formidable Taste.

ANNOYING
He was philosophical about the situation though:  “This seems to happen to most people these days.  It seems to be part and parcel of the scene.

“Of course it annoys you when no‑one even bothers to ask you first, but I suppose it is not so bad as long as people see the situation for what it is as far as the stuff that is getting on to this album is concerned.

“What happens is that you will be in the studio doing strictly demo tapes or some­thing and the guy in charge will say, ‘Hey boys, let’s give it a try.’  You may not be too serious about it, but those tapes still get stored away and anything can happen.”

The recordings to be used on this controversial album were actually put down in a Dublin studio years ago.

Ironically Gallagher and his sidemen, Gerry McAvoy (bass) and Wilgar Campbell (drums), who joined him after the break-up of Taste have just completed work on a new Polydor album.

They put the final touches to it before flying out to North America last week to start a month‑long nationwide tour.  The new “official” album is called “Deuce” and is to be released early in November.  It will show where Gallagher is at now, not years ago.

In terms of time, it is almost exactly three years since Gallagher first had the rock spotlight turned on him full force.  It was at the emo­tional Albert Hall farewell of Cream, and he remembers it well: “It was a little bit of history.”

I remember it too, for there were sneers and jeers from some of an enormous and im­patient audience as the young Irish guitarist put together his blues phrases as best he knew how.  Gallagher was being put through the Eric Clapton com­parison mangle.

How different it all is now.  Rory has all the recognition he could wish for.  A few still smear him for allegedly play­ing fast, furious and flash; the same sort of criticisms that faces others like Alvin Lee.  Fortunately the critics who talk of “distasteful” styles do little to smudge the fact that these are among the finest gui­tarists to emerge from the entire British rock machine.

Had his music and attitudes towards it changed very much since the early days?

MATURED
“Obviously I have learnt a lot and probably matured too, if that is the right word.  Things that happen influence you, like the musicians you play with.  They have an effect on the songs I write.  But essentially, I don’t think I have changed too much and neither has my attitude to music or my musical identity, if that is what you can call it.  I still have the same ideas as I had six years ago.”

What Gallagher calls his musical identity is closely allied with his electric guitar blues work.  He does play some acoustic guitar and enjoys it:  “Oh, it’s the raw in­strument isn’t it?  I would like to do an acoustic album some time, and I’m also tempted to do a live album too.”

This might include a man­dolin number which he has incorporated into his scheme of things on the road.  He had in fact originally intended to use mandolin on the new album “Deuce”:

“But the material we have used didn’t really call for it.  The album has got quite a lot of bottleneck on it though.  I’m pleased with the album and I think it is pretty gritty and raw.  Very spontaneous too, ‘cos we got the vocals down live with everything else and in the first few takes.”

DELAYED
The Gallagher band will still be in the States when “Deuce” is released over here. It is their first visit together to the colonies and there were problems last week just as they were due to fly out.

The visas failed to arrive “red tape I guess at the American Embassy” - and their departure was delayed for a couple of days.

When I spoke to Rory in a Los Angeles hotel, they were all recovering from the unplea­sant experience of having to play in L.A. almost as soon as they stepped off the plane after a long and exhausting flight.

Rory reported that the tour had started well.  When they get back, it will be to spend Christmas in their troubled homeland, and Rory re­affirmed his determination to not to let the mounting horror of Northern Ireland stop the band from continuing to play there:

“I’m not going to eliminate it as a place to play, and anyway it is nice to get back there.  Maybe the authorities might have to ban concerts at some time, but as long as we can go back we will.”