the Unknown Soldier
by J.D.Considine Fans like to think that there are two basic truths regarding the guitar-god pantheon:

First, that it comprises only the best of the best, and second, that it rewards talent more than fashion or popularity. After all, if retail sales counted as much as instrumental agility, would Jeff Beck be up there with Eric Clapton and Jimmy Page? Obviously not.

Trouble is, the accepted canon of guitar greats isn't as inclusive as it ought to be. The omission of the recently deceased Rory Gallagher is a case in point. Measured against the standard of pure playing ability-amply demonstrated on this posthumous career retrospective- he was easily one of the best bluesmen the British Isles has ever produced. As a stylist, he was capable of handling anything from a classic Twenties rag to an acoustic bottleneck blues to a funky electric workout in the style of Albert King. With his effortless technique and soulful delivery, Gallagher stood head and shoulders above Mick Taylor, Peter Green and Alvin Lee, and at his best was easily on par with Jimmy Page and Eric Clapton. 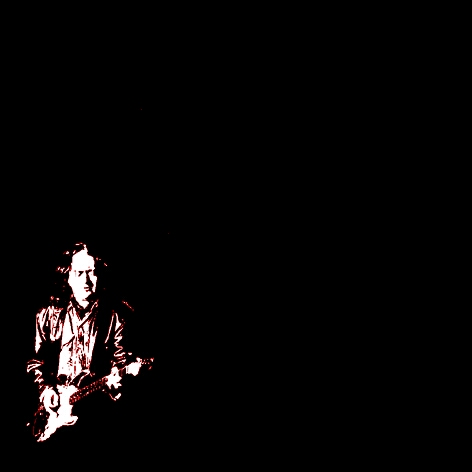 So, how come he's seldom mentioned in the same breath as those guys?

Obviously, commercial success played a part. While Clapton attained godhead status with Cream and Page broke box office records with Led Zeppelin, Gallagher's power trio, Taste, made almost no impact outside the U.K. and Europe.  Moreover, Gallagher's lack of in “making the scene’ or following trends made it hard for casual fans to come across his music; to a large degree, if you weren't a Gallagher fan to begin with, odds were slim that you'd ever hear his music.

But the biggest difference between Gallagher and the likes of Clapton and Page was his fidelity to the blues. Unlike Clapton, who brought a blues sensibility  and soulfulness to what was essentially  pop material, or Page who saw the blues as a sort of raw material ripe for transformation, Gallagher served his straight up. With a craftsman’s ear for detail and a purist's sense of style he made the blues his own- not by rearranging it as rock... but by mastering its idiosyncrasies.

On A Blue Day for the Blues, this comes through most clearly on ‘Pistol Slapper Blues" a Blind Boy Fuller tune originally released on 1972’s Live or Europe/Stage Struck. Although it's clear a lot of woodshedding went into the performance, it's also obvious that Gallagher had enough confidence in his own taste and vision to avoid doing a note-for-note imitation of Fuller’s fingerpicked original.

One of the more impressive things about A Blue Day for the Blues is Gallagher's acoustic work. A full third of the album is devoted to this side of his work, and it's stunning to hear how completely he mastered the instrument. Although his slide work is sometimes flashier than it needed to be (as in the overly busy opening verse of “As the Crow Flies” a cut from Irish Tour ‘74), he generally kept his technique in check, letting the song shine as brightly as the placing. The Son House oldie “Empire State Express,” lifted from 1990's Fresh Evidence, for instance, is full of fancy picking and growling slide flourishes, but they're always in support of the vocal line; even when what he does is jaw-droppingly difficult. there's never a sense that he's showing off.

Tellingly, Gallagher's electric work featured on Blue Day is even more modest, placing less of an emphasis on speed than on tone and expression. There are some wonderfully subtle touches on tunes like the Freddie King-style “The Loop,” and some scaringly expressive bottleneck work on “Bullfrog Blues:’ but none of it is the sort of thing likely to wow non-players. Even when he does try to put a little flash in his solos, as on 1976's  ‘‘Calling Card’’ (the closest thing to mainstream rock on this collection) or the full-out stomp "Shinkicker"  his terse phrases and keen sense of groove music make his playing seem unduly modest. This was not a guy who played to the cheap seats.

Maybe that's why there were so few accolades when he died last year. Unlike the mass of faithful the other guitar gods command, his following was cult-sized at best, and to be honest, A Blue Day for the Blues is unlikely to do much no change that . A pity, because despite its faults (the most notable of which being its lack of anything by Taste),  it makes a strong case for him as the guitar god many listeners never knew.