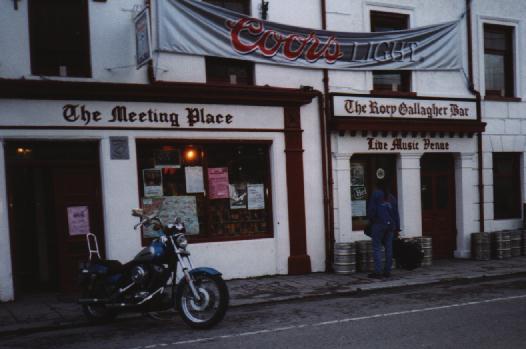 NINETY MINUTES INTO A SWEATY set before a jam-packed house, Rory Gallagher gives his band a break and straps on an acoustic. Coricidin bottle clenched-fist roar as he slides into the opening riff of Robert Johnsons Walkin Blues. After tunes by Leadbelly and Blind Boy Fuller, he returns with his band for three electrifying encores. Its been six years since Gallagher (pronounced galla-her in the Gaelic, mind you) toured the U.S., and hes making up for lost time by covering a broad spectrum of songs ranging from his Taste records in the 60s to selections from 1990s Fresh Evidence [IRS]. We spoke backstage in Santa Cruz, California.

Youve always seemed to gravitate toward roots American music.
Even though you develop as a player over the years and become influenced by different things, you have to keep to the heart of what you started with, that initial vision of music. I grew up in Ireland where folk and traditional music is very close at hand, but I really wasnt turned on until I heard American music via Lonnie Donegan, who was doing Woody Guthrie songs, Leadbelly. Of course, I heard the early rockersElvis Presley, Eddie Cochran, Chuck Berry. So it was a mixture of folk, blues, and rock from America. I just followed it through and eventually learned whos who in the spectrum of things, the prime movers and the copyists. In early blues, for instance, everyones stating that Robert Johnson is the virtuoso of that era, but Son House was very important at the time.

All young rock and blues players should dig deeper, back beyond the obvious big blues stars like B.B. King and Buddy Guy, who are great. Im very interested in the country blues and electrified country blues, such as by Big Joe Williams. I also like all the slide players from Earl Hooker through Muddy Waters. Robert Nighthawk is a favorite of mine, and I eventually discovered Tampa Red. That lick that Muddy Waters is known for came from Tampa Red. So this folk music tradition of passing on, picking up and stealing goes on like mad. If I'm doing a blues number, I can do it very traditional if I want to; I can also add my own twists to it.

That's clear in several cuts on your new album.
Yeah. "Empire State Express," for instance,was done in one take on purpose. I do it close enough to Son House's style, but to sing it in the tempo, I had to slightly adjust the rhythm. It's a great but very overlooked song in open- G tuning [D G D G B D, low to high]. "Ghost Blues" is quite traditional in its approach with the National; it's also tuned to open G. The guitar in "Middle Name" is more like a Slim Harpo record, so there are all kinds of references. Besides a few rock tracks, the rest are very much in the blues field. The album before, [1989's] Defender, had a lot of blues elements as well, but it was more of a rock production, whereas with this new one we didn't overdo the compression or the cleaning up. We left it fairly wooly and casual, which suits the songs. I hope people catch up on Defender, because it's still quite current in our set, even though we move the repertoire around every night. Nine times out of ten, I work off the top of my head and we move from album to album.

You're still using some of your old equipment.
Yes, even though some people have this image of me as being so purist that they don't even want me to use electricity! My old Strat that I've always played is super-glued together. It's November '61, and I got it secondhand in '63. It was the first Stratocaster in Ireland, apparently. I also used a '57 Strat on the album. But for some of the strong rhythm guitar parts, I used a small Gretsch Chet Atkins, the Les Paul-shaped one [Model 6121], or a Gibson Les Paul Junior. Even though I'm identified with the Strat, having Strat rhythms and leads can be a little one-dimensional, unless you're in the Hendrix situation. It's nice to have alternative guitars to broaden the sounds. What's my favorite amp? It's a battle between the Vox AC-30, which is my first amp, and the 4x10 Fender Bassman, although I love the little Deluxe as well. I have played Ampeg Vt-44s, which are very nice, and over the years I've used Marshall 50-watt combos in conjunction with the Fender or the Vox; they're very good for volume and bite. But the warmth of the Fenders and the character of the Voxes are pretty hard to beat.

What should a Rory Gallagher solo be about?
I try to split the difference between being fairly clever and technical and still primitive. I used to always go for live leads-mistakes and all-just for feel. Now if a certain song needs a very melodic solo, I'm prepared to work on it over and over. But I try not to get in the habit of dropping-in, because it's very tempting to get the perfect solo. As a rule, I try to keep a grip on technology so it doesn't take the human factor out of it.

Describe your slide approach.
Pick and fingers. I also vary the slides. Sometimes I use a Coricidin bottle on my ring finger, sometimes my small finger. I use a brass slide if I'm playing a National. If I'm playing a straight [standard tuned] electric, I use a steel bottleneck. The sound of glass is more smooth and sweet. The brass or copper is very harsh-if you want to get the Son House sort of attack-but it's almost too harsh all the time. Steel is a good compromise and socket wrenches are ideal. I have a 5/8th or 7/8th, because John Hammond told me he was using one, and Lowell George had one as well. They're fantastic, but you really need very heavy strings. And if you're playing more than a couple of numbers, they do wear your small finger down, and you don't want to be tiring your hand. I use a Gretsch Corvette for slide in open G or A [E A E A B# El, and that's got strings from .013 to .050. The action on my regular guitars is quite high and the strings are .010 to .044, so it's okay for slide. I can cope with both.

Why have you waited so long to tour here?
We went back after the last American tour in '85 and just got stuck in Europe touring and recording. We were trying to sort out the right record deal, and I don't know where the years went. We got irritated, too, because we were on a couple of big nationwide tours with stadium rock bands, and we were badly treated in some cases with monitors, amount of stage room, lights, and time onstage. It wasn't so bad when we were on the same bill as ZZ Top, but we were also on bills that were totally alien to our kind of stuff. I'd end up feeling I'd wasted a couple of weeks of my life. To make matters worse, I developed a flying problem; I'd had a couple of bad flights and I got my Buddy Holly complex. It got so bad I couldn't even fly to Ireland, which was only an hour away from my home in London. It was mainly claustrophobia rather than a fear of death, but it was quite an ordeal for me. But my prayers have been answered, and so far so good.

What is the status of your past releases?
All of my old albums are coming out in the next year or two on IRS, EQ'd for CD. We're going to do a boxed set, too. With this absence behind me, it will be great to have all my old material out again. People can look at it and see if it's held up in court.