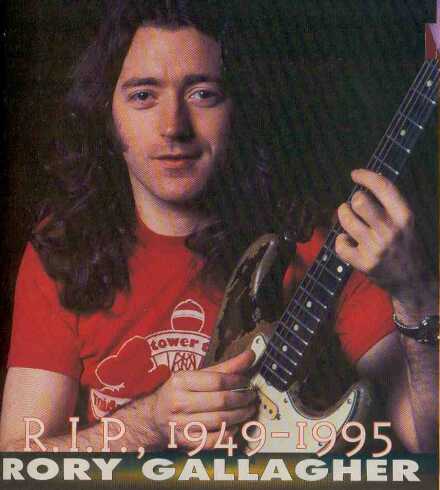 A bluesy string shaker with a Claptonesque voice, Rory Gallagher emerged in the 1970's as Ireland's preeminent blues-rocker. With enviable dexterity, he melded sheer speed, rippling harmonics, sure-handed slide, and battered-Strat tones into a scrappy, instantly identifiable sound. "In my solos," he told GP in '90, " I try to split the difference between being fairly clever and still primitive." Rory was just as impressive on acoustic, especially his energetic covers if prewar blues.

Born in Ballyshannon and raised in Cork, Rory began playing  cowboy songs when he was nine. Lonnie Donnegan's skiffle hits led him to discover Leadbelly and other American blues artists who would provide him his greatest inspirations. Rory devoted most of his March '78 GP ( Guitar Player) cover story to his blues heroes, summarizing, " In my case, the obvious influences would be Hubert Sumlin, Earl Hooker and Buddy Guy, electrically. Acoustically, it would be Blind Boy Fuller and Blind Blake."

At 15, Gallagher began touring the British Isles with the Fontana Show band. In 1965 he began a five-year stint with Taste, a pioneering power trio that faced its biggest audience at the Isle of Wight festival. Gallagher then declared his independence and released such standout solo albums as Tattoo, Against the Grain, Blueprint, Blueprint and Sinner and Saint.  He appeared as a sideman on albums by Muddy Waters, Albert King and Jerry Lee Lewis.

In the mid '80's, a fear of flying grounded Gallagher in Europe, where he continued to tour. Rory returned stateside in 1991, reprising past hits and showcasing new material during his stunning stage performances. In contrast to his rowdy stage presentation, Rory was shy and soft-spoken offstage, and interviewers found him self-effacing. On June 14th, the 46 year-old died in London from complications following a liver transplant. His final appearance on record was reportedly with his boyhood hero, Lonnie Donnegan on the aptly-titled Puttin on the Style.