Rory Gallagher's a lumberjack and he's OK bejesus - except for his rotting guitar, those dirty shirts and that salt-in-the-blood problem...

It is especially droll to note that John McLaughlin once took it upon himself to reprimand Rory Gallagher for his (Rory's) attitude to audiences. Last year the two bands found themselves among the inventory of ar­tistes booked for an open air festival in Los Angeles.   One of Rory's band had just tipped an ice bucket over the head of a passing roadie.   McLaughlin, who had previously re­mained silent to Gallagher's "how are you doing John?" because the former had omitted the Mahavishnu prefix - had sidled across, radiating his characteristic radiance, taken Rory by the arm and pointed out that "as an entertainer, do you not realise that you have a responsibility towards uplifting the con­sciousness of your audience?"   Readers may note that several weeks later McLaughlin suffered a brain-storm and renounced his faith after gulping down a half bottle of Teachers. While Rory, of course, never changed at all. He soldiered on, with only a lumberjack shirt, and a battered Stratocaster to keep him company. 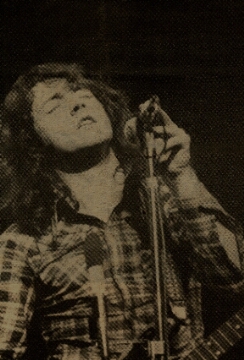