PLAYER OF THE MONTH
RORY GALLAGHER

DURING gigs, Rory Gallagher stomps the stage, bending the most absurd blues notes out of his Strat.  Invariably the packed audience is on their feet, sweating, leaping and cheering.  Off stage, you’d hardly notice Rory in the street.  No glitter or filthiest-Levis-of-the-year image for him. Instead, an ordinary jacket, tee shirt and trousers. No ego tripping either. Rory is one of the friendliest people you could hope to meet, with a shy grin and a soft Irish brogue.

He looks amazingly young to have just got out his sixth album, and this total doesn’t include the albums he made with Taste. Yet he has passed right through our so called rock heritage from playing in Irish showbands, doing Chuck Berry numbers, through the Donegan and early Stevie Winwood era right up to now and it certainly shows in his playing, which is strongly rooted in R & B yet has a very American sounding funky feel, too.

“I started playing the guitar when I was nine years old,” said Rory. “That’s when I got my first real guitar, because before that I’d only had a plastic one from Woolworths!

“In those days, Donegan, Holly and Cochran were in the charts so I listened to them, bought a tutor book and had a few lessons. I ploughed away and learned all the skiffle and R & B numbers. I started playing electric guitar at about twelve. 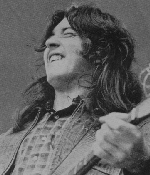 Rory was living in Cork then and it just wasn’t the fashion for schoolboys to play guitar and form groups. “I didn’t talk about my music at school because everyone thought music was degenerate at the time! But I did find a couple of friends who also played and we used to get together.”

When Rory left school, he immediately landed a place with an Irish showband and through this he got to Spain and right round the Irish dancehall circuit in England.  “They weren’t by any means an ordinary showband, though,” Rory explained.  “Everyone was into their own things, and most of us wanted to play all the gutsy R & B things like ‘Nadine’.”

Finding this too restricting, he spent six months forming his own group and by this time he was starting to write his own material and that distinctive guitar style was emerging. After a few line up changes, he ended up with Taste, the band with which Rory really made his name.

The line up of Rory’s present band is Gerry McAvoy on bass, has been with him since Taste split, Lou Martin on keyboards and Rod De’Ath on drums, Rod and Lou both having come from Irish group Killing Floor. They all have the same kind of roots and background and are very, very tight.

Their last album, Tattoo, catches them just at the exciting point where their music had really come together and started to take off after two highly acclaimed tours of America.  Listen to the blues sound they achieve on 20-20 Vision and They Don’t Make Them Like You Anymore. Then pass on to Rory’s brilliant acoustic bottleneck and sliding electric on

Who’s That Coming and the funky black sound on Livin’ Like A Trucker. It’s all ballsy, it all whips up a storm on stage, and there’s just no arguing with the versatility and feeling in Rory’s playing.

He doesn’t try to play deliberately authentic blues. “Whether it’s authentic or not, if it sounds good and feels good, that’s it for me. I like anything with guts and that can include gentle stuff, too.”

As far as writing is concerned, Rory finds he needs relaxed surroundings away from the frenetic tour atmosphere in order to get in the mood. “In fact, I do almost all my writing in Ireland, when I go back to visit my family. I wouldn’t give Ireland absolute credit for my writing, though, because I find relaxing always puts me in a writing frame of mind.”

Whereas some bands find having to produce lyrics a necessary evil in order to sell albums, Rory actively enjoys it and some of his less driving songs have lyrics which are well up to the standard of the better contemporary song exponents. “I like songs and songwriting and I feel that too often people use a kind of accompaniment that is meant to show off their technique and doesn’t fit in. Often it’s best to keep it quite simple because the guitar should always fit into the context of the song.”

Rory’s latest album, the four sided Irish Tour ‘74, proves the point that this is one of the rare bands who sound as exciting in the studio as they do live. The only difference being that because this is a live album, recorded by means of Ronnie Lane’s mobile studio which they brought along to gigs at Belfast and Cork, there are more long solos and instant improvisation.

Rory still uses on stage an old style amplifier that dates back to 1955. “It’s a Fender Bassman with four ten inch speakers as opposed to two twelve inch ones. Buddy Holly had one.” He also has a Vox AC 30.  Guitar wise, he has a Stratocaster for what he terms ‘ordinary playing’ and a Telecaster for bottleneck.

“I also have a National steel guitar which I came across in the States,” he added. “It must be at least 30 years old. I found it in Washington, Missouri. Some guy brought it along to a gig. You see, you get quite a few ‘traveling salesmen’ in the States who have a van or minibus and spend their time traveling around picking up interesting guitars and selling them to musicians at gigs.

“But one thing I really hate about people who play both acoustic and electric is if they try to play electric style on an acoustic guitar. You must develop it as a totally different thing.”