All-action Rory heads for the studio
by Rick Sanders 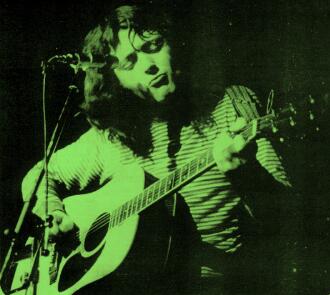 "HELLO HERE!" The unmistakably Irish tones of Rory Gallagher's road manager emerge a little thinly on the RM telephone. "Oi have Rory for you now in New York."

Rory and the band have just finished the third tour of the USA, the most successful yet, the groundwork of the two previous jaunts - five weeks in 1971, fifteen weeks last year - having paid off with full houses all the way on this ten-weeker.

How you feeling, Rory? Exhausted? Not a bit of it. Mr. Gallagher, long known as a glutton for live appearances, says: " No, I'm not feeling too bad at all. I'm just looking forward to coming back. I'm catching a plane in a few hours to London, and then I'll go off to Ireland for a few days before we do some recording."

How was the tour, then? "Oh...(modestly) you could say it was solid. Most solid. I think it'll take one more tour for us to really get off the ground here.  There's so much territory to be covered and we've still got a lot of places we'll have to play."

"Mostly we were playing clubs and colleges on our own time, though we did some gigs with Deep Purple and they even put us on one time with the Beach Boys. It was most unusual to play a definitely Beach Boys audience -
it's not our sort of following at all - but they seemed to take to us well enough."

"Every place we played, there were people shouting for particular songs of ours."

"We were hoping to do a little recording while we were here, but there just wasn't time. We were playing almost every night, and if you're going to record here you need to give yourself at least a couple of weeks."

"What we want to do is record a live album in a club when we next come to the States in August and September."

What were our Erse wanderer's impressions of the American scene?

"Bands, and some of them, especially in the South, were really good. My feeling is that all the best new ideas are from there....wherever we played we found these really good bands, rather than stars."

"Unfortunately we didn't get to play there this time, but everyone was telling us that the club scene in Georgia is very exciting just now."

"I'd like for the same thing to happen in England again. Everything's' going to have to loosen up and get back to the grass roots - all these concerts are getting so cold."

Who else had he seen in the States? "When we were in Houston, Texas, we played with an excellent old blues singer called D.C. Bender. I got to see Freddie King in L.A., a blues player called King Biscuit Boy in Toronto and Gordon Lightfoot too - I really enjoyed his concert. I like his approach very much."

How was the band shaping up? "Well, after you've been on the road for ten weeks solid, you obviously get very tight. In fact, I sometimes think that we're maybe a bit too tight, to be truthful - but anyway, we're in very good shape right for recording."

Are there many new songs ready for recording.....a lot of bands seem to write their best material while on the road.

"Actually I find it better to write songs when I'm off the road, so we haven't got so much new yet. I'll be starting writing when I get home."

And finally, when can we next expect to see Rory and the band playing English dates?  "After our autumn tour of the States, we'll be doing a European tour in October.  After that, we'll be playing a couple of months in Britain. The last time we played was in March, so that's quite a long gap. But we may be doing a certain number of dates in between. We'll have to see."