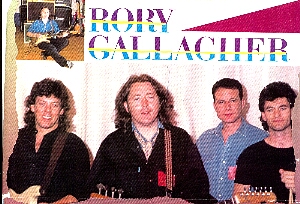 Al Simpson speaks to
the Defender Of the Faith

Rory Gallagher is back.

Not that he ever really went away though. He may have slipped away from the public gaze for a few years , but he wasn't stuck in a pub or sunning himself in some exotic island, enjoying the royalties that he must have accrued over the years. No, Rory Gallagher doesn't play the rockstar. While he was busying himself writing Defender, the new album, according to many critics, ranks amongst the classics like Tattoo and  Blueprint". It was about time we saw the guitar wizard and his endless succession of lumberjack shirts pacing up and down the boards again, squeezing magic from his sweat stained Stratocaster. Now we can look forward to some dates, and by the time this article hits the streets, the Irish bluesmaster will be well on the road. We chatted to Rory about the new album and what makes him tick.

Rory Gallagher, unfazed by the current trend of over production in the studio, has deliberately taken his time. Unhindered by contractual deadlines set by record companies, Rory took a few years; on and off, to record " Defender".

The end result is, to say the least, a return to his roots and that's something Rory Gallagher agrees on. "It was a deliberate move. We've never rally strayed from the path, but the past few albums may have been a little off centre. This one is a most definite return to where we've come from. The music in the album is a real mixture. What I was trying to do was to get a roots sound. I wanted it to sound like it was recorded for Chess or Sun, but at the same time having a 1987 feel. Chess and Sun were the two labels that the young Chuck Berry and Elvis Presley started on. "It's hell trying to get the two together because I hate pop rock or pop blues. I wanted to get the feel just right." Rory cites his greatest influences as LeadBelly, Muddy Waters and even Eddie Cochrane, but one of the names that crops up the most in conversation with Rory is that of Chuck Berry.  "What I wanted was a sense of unity on the album. The songs may be a real mixture, but it is possible to get a feeling of unity."

Rory states that he hates pop rock and pop blues, so how does he see the current state of rock music? "There's a lot I haven't listened to, but I feel there's too much criss-crossing." (by that Rory must mean the Crossover-Metal-Blues-Thrash thing) "Yeah, there's not too much variety. I'm not saying that bands shouldn't experiment and try new styles, but everyone seems to be trying to find a new direction and you don't necessarily get that from mixing styles as you can. There's too much criss-crossing."

As always, Rory is backed on the album by his old mates. Gerry MacAvoy on bass, Lou Martin tinkling on the ivories and Brendan O'Neil on drums. Joining the hardcore are Mark Feltham doing his bit on the harmonica and John Cooke adding depth on his keyboards. The big surprise is to hear Rory blowing away on the sax- something he hasn't done since the days of Taste, though he does admit that his playing isn't exactly virtuoso.

The last time I saw Rory, he looked as if the time off the road had..uhhmm, ahh.. taken it's toll on his waistline...not something that's exactly handy on tour.

"Well, I have been taking things easy, " he says in his soft Irish lilt that could charm the pants off any girl, "but we're going to be getting in shape for the road. There's no way you can go on the road without getting into shape. Before the tour, I'll be getting exercise, maybe jogging, to lose the odd pound or two. I put a lot of energy into the shows and a tour as a whole takes a lot of stamina"

Personally, I don't care what Rory looks like. He could play dressed up as a nun and I'd still love it.