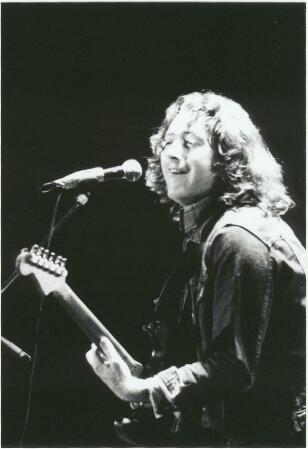 Well, the people who did visit the concerts saw and heard  Rory Gallagher at his best. He lost nothing of his magical playing. After the certainly not bad, but a bit boring, supporting act around guitar player Mike Lester, Rorys performance was like a breeze of fresh air after an oppressive heat. With a new drummer, the young Brendan ONeill, and his bass player of many years Gerry McAvoy, Rory Gallagher delivers a fiery work of powerful blues rock. His new album Jinx was for his fans already proof enough of untamed energy. The preceding live album can now be regarded as a S.O.P. for the upcoming studio album.

New ideas on the guitar are tossed off, although, after so many years in business, it is no wonder this or that guitar run has been heard before. That's no problem, says Rory. " I don't fall back on old riffs, I keep developing. Every time I pick up the guitar something new happens. When you write new songs you use different chords, you develop as a musician  new riffs are not hard to find. It's not always easy, but when you are constantly on the ball you don't burn up quickly. On the other hand it seems hard to believe the production of the new album took so long (almost four months).


If you want the percussion to sound as natural as, for example, in a practice room you have to spend a lot of time. It is not enough to put up a few supporting mikes in the studio. You have to work on the sound. If you want the Howlin Wolf or Chicago Blues sound, every sound engineer has a few recipes readily available. But then you are stuck in a stereotypical, produced sound. We used a lot of time moving the percussion around in the room; we used old tube microphones to get the old Presley-sound, especially for the percussion. When you hear the record it does not sound like extensive recording at all, but we had a lot of work to give it the natural sound of a Howlin Wolf record, but I think we got the best sound that has ever been produced.

As always, with the new album Jinx and the now finished tour in Germany, Rory Gallagher has shown he is in no way ready to be discarded.

And for his increase in weight he also had the right matter-of-fact answer at the start of the tour. That will be gone by the end of the tour.