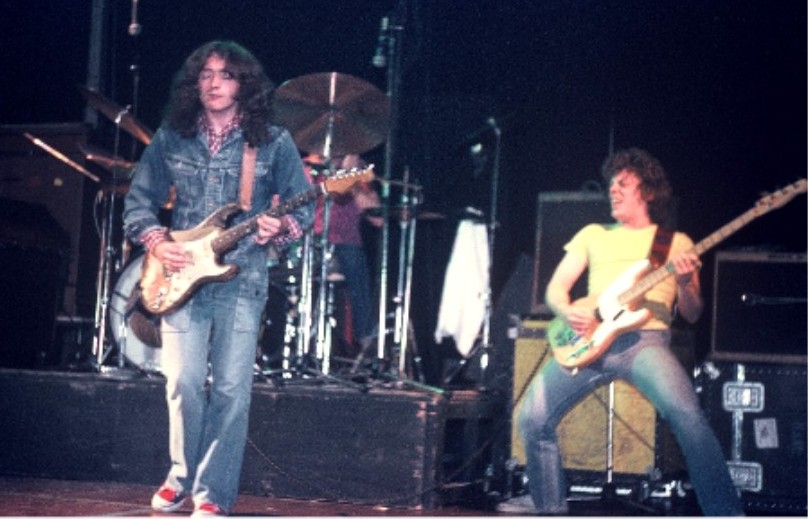 
How, after all these years, Rory Gallagher manages to retain such a high level of energy and spontaneity in his act without any great change in format still remains one of rock's most delightful mysteries. The RG bringing '76 to a close is as fresh as the Irish boy who brought Taste to England seven years ago.

Theoretically, Gallagher should be feeling the strain of his eternal tour. It's a tribute to the enthusiasm he and his band whip up that he's not.

The opening of the British tour at the Glasgow Apollo last Friday followed a lengthy American tour, which followed a European tour, which followed a spell in the recordIng studios (the cycle goes on and on); and yet there were no signs of either lethargy or tiredness setting in. Quite the opposite, in fact, and the well-worn statement that Gallagher's music thrives on hard work is as true today as it has been at any period in his career.

The revamped British set offers slight compromises  to rock dynamics -something that Gallagher has desperately avoided before, but, as he displayed on the " Calling Card" album, he is not averse to sensible infringements of his honest " keep it simple' " policy.  So, this time round, there's a taped Intro to the set, the beautiful start of  "Edged in Blue"," which creates just the right mellow mood, and there s also a more concentrated, but clumsy, effort with the lighting.

Other than that, the onus for a successful night is laid fairly and squarely on Gallagher's own personality, as it has always been, and it is that pressure which makes his concerts so vibrant. Even though the sound on Friday night (the second night at the Apollo) was rather haphazard, the sheer excitement that Gallagher and band create in an boor and a half was enough to make the evening special.

Gallagher used a lot of the material from " Calling Card," including the jazz-influenced title track, the chugging " Do You Read Me" and the magnificent " Edged In Blue," a melodic,  but forceful number. The mixture of old and new  material was thoughtfully  balanced, with " Tattoo'd Lady " still the most memorable song in all of Gallagher's repertoire, and the hard hitting trio of " Bullfrog Blues;' " Messin" With The Kid" and " Country Mile " was a suitably sweaty end to the night.

Gallagher's band, too, gets better. Keyboard player, Lou Martin is taking a more prominent role, while the rhythm section of Rod de' Ath on drums and bassist Gerry McAvoy is a solid foundation for both Martin and Gallagher to build in.

There also was, of course, Gallagher's acoustic solo segment midway through the set, when he daringly drops I the ferocious pace and challenges his  audience to sit down and listen. It's the sort of challenge most rock bands shy away from, as they opt for the predictable and proven.
-HARRY DOHERTY
~~~~~~~~~~~~~~~~~~~~~~~~~~~~~~~~~~~~~~~~~~~~~~~~~~
This article comes from the December 25,1976 issue of Melody Maker
Thanks to Lotte Lieb-Dula for passing it along
Thanks to Jos Remans for the great photo
reformatted by roryfan