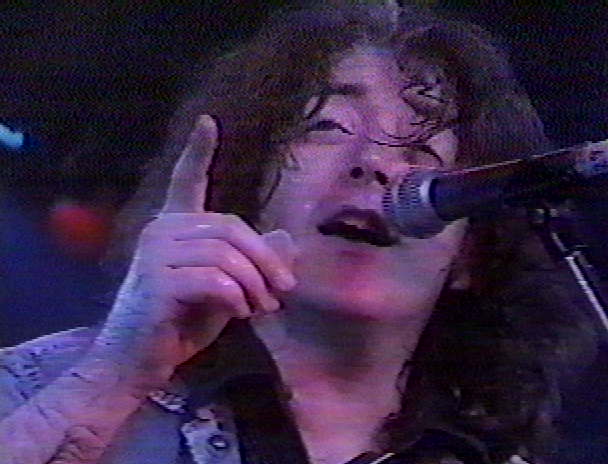 Anyone who attends Rory Gallagher concerts knows up front what to expect.... Guitar work par Excellence. Also this time, maybe a bit better than usual. The new line up, without keyboards, gives Rory more space musically and he uses that space. The known songs from the time of the previous line up, show best how Rory is much more lively today as a performer. Not that lack of a lively performance ever was the issue.

There is another thing that has changed. While Rory usually played almost a whole set with his Stratocaster -with the exception of a Dobro or Mandolin-  he played almost as much of the set with a Gretsch guitar. The Gretsch has much more sustain and according to Rory it is a better guitar for the songs with slide, especially Mississippi Sheiks. And the new sound works. The new songs are just as good as the well known songs from Calling Card and older albums.

It is remarkable that the crowd must exist of really fanatical fans, because at the time of the concert the new album was just a few days out and the songs weren't played much on the radio yet, still from the crowds response, it was clear that they knew the new songs.

To summarize the concert is hard, the entire concert was one positive celebration of Rock and Roll, Rory at his best, Rory in super shape, and anyone who knows Rory, knows how good it was.

Days before the concert we met Rory and had a little chat about guitars (what else ?) and some facts from this conversation we'd like to mention in this article. First of all why Rory uses both a glass and a metal slide. The reason is simple. The metal one makes the sound harder, the slide notes get an edge, the glass one gives a more singing note. Besides that a glass slide sounds better on an acoustic guitar than on an electric guitar, and that's the way I use them: to produce the sound I want. Apart from playing electric guitar or acoustic guitar, I always choose the slide which suits best the song, an acoustic sound with a lot of chords or an electric sound with a lot lead.

Maybe at one point, it was okay to criticize Gerry McAvoy for his limited bass playing and being the weak spot of the Rory Gallagher Band. But on this tour, like the tour before, he showed he isn't far behind his master in speed and touch. In this regard, on the day of this interview there was some other interesting news. From Los Angeles the news came that Stanley Clarke, Lenny White and Jeff Beck want to join up in a new Cream-like band. Well, Cream, Free and Taste were all unique in their way and to make a chart-list is as stupid as making a comparison between Rorys band at the moment and this new Jeff Beck band. Rory says it best when he talks about his music and his line-up.

Sure it would be fun to play with Jack Bruce or with Stanley Clarke, but it would be a competition. Bass against guitar and vice versa. I don't like these things. I don't even like a competition of guitar against guitar. I just like to rock, to make Funk. I mean when I enter the studio in the morning and Ted (the new drummer), together with Gerry, just jam and play as a warm-up . . . . music where you automatically move your feet to the beat. I mean when you make music you better not think about technique. Music is more like chemistry. Music just happens, at least my music does. I think that's the way it should be."

"But besides that it could be good fun playing with Lenny White or Stanley Clarke, it depends on the project. In a jam-session you often loose the original idea and all of a sudden you find yourself playing jazzy pieces while you actually want to play bluesy pieces, at least I do.

That Rory loves to play a lot of bluessy pieces, slow or in a moderated up tempo way, is well known and the fact that his slide playing is excellent doesn't even have to be mentioned. On the new album Photo Finish,  the master shows some new examples which can only create astonishment. We ask him what tuning he plays the slide songs.

Believe it or not, all the slide pieces I play are in a normal tuning. I play in the key of A, E or B. On one of my older albums I play Bullfrog Blues and I played that using a tuning in B. When you have to play rhythm and lead guitar and some pieces slide,  tuning other than the normal one is hard anyway. To change guitars in a song, I regard as useless luxury. Mississippi Sheiks from Photo Finish is in a G-tuning and on the solo pieces, I just pick up the slide and play the solos,  because with this tuning the B,G and D string sound like open bottle neck keys. But luckily I am able to play slide with a normal tuning. Sure you have to practice it, I could show you if I had a bottle neck with me now.

But that was not a problem, within a short time we had an empty container of a photo film and Rory was able to show some tricks even tough it didn't sound good on his battered burns.