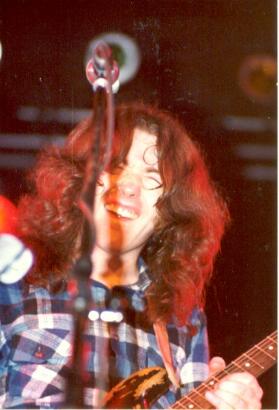 Rory comments on his musicians

Musik Express 5/72
Richie and John didn't feel so good with me anymore because they wanted to play STUD music, that is sort of jazz. I feel the happiest when I'm playing with Wilgar and Gerry. We get along well with each other and that's an important condition. I've played with them for a year now, so that's a rather long time. And they seem to like my songs and my music. We are very happy.

Wilgar wrote for the group where he played before. Maybe he'll do an album with his own compositions sometime.

POP 1972
Richard McCracken and John Wilson had never written their own songs, so I thought that they would be satisfied with my songs. But later they were most unhappy because of that, so I left.

Richie and John are good musicians. I like STUD. But that has nothing to do with my music any more.

English newspaper 1972
Richard and John are both most perfect musicians

POP 1973
Lou Martin is the name of the piano man and he comes from Belfast. Besides, he plays a little bit of guitar, and therefore, he's quite useful.

Popfoto 1973
One day I watched Lou Martin when he was playing and I was immediately thrilled and all that...this man could play..... He's really brilliant. In my opinion, he's a great pianist. Well. I simply took him on then.

Wilgar didn't like to play so much anymore. He's married and has two children. It wasn't easy for him to be traveling around all the time. He preferred to stay in London and is now playing with the Mick Abraham Group.

Popgala 1973
One day  Rod De'ath and  I went to see his friend, Lou Martin, and I heard him play. I'd never before seen a pianist who played rhythm & blues so well. He's very versatile.

Music Scene 1973
John Wilson felt more attracted by jazz, whereas I found my best development in songs like the "Gamblin' Blues"

Fans 1973
Lou is an excellent musician, who has the appropriate feeling for our band.

Cork Examiner 26. June 1978
I wanted Gerry McAvoy to stay with the band because we've always had a great understanding for each other when we were on stage. His play inspires me. I don't know why, it's hard to explain. But when you play with someone like Gerry, there's just his electrifying spark on stage here and there. However, he's an excellent bass man.

Then I've tried various drummers and decided on Ted McKenna, who I regard as a fantastic drummer. His rhythmic and dynamic play matches perfectly Gerry's play.

Lou Martin is really great. I like him a lot, also his play, and there are no arguments between us.

Musik Express Oct. 1978
Ted McKenna is a drummer who drums very earthy, very much near the base or something like that, that is without all that nonsense and foolery.

Spotlight Oct. 1978
In the four-man formation, Rod was able to represent himself quite well, but this is not possible in a three-man formation.

We've tested many new drummers, and it wouldn't be fair to say who because a lot of them were much too good for this job, but on the other hand they couldn't do it either. Until, finally, Ted McKenna gave his audition. And right from the start it was obvious that he instinctively know how and what he had to play.

Best 1973
Rod de'Ath plays a harder and more direct style than Wilgar Campbell. Wilgar played rather supple, stretched the skin of his drum less and brought more changes into the rhythm. Rod's rather a rocker. He's very good, but in a different style. It was too hard for Wilgar to tour so much. He's married and can't bear to be separated too long from his wife and children. When I did an Irish tour in spring '72, Rod played provisionally with us because Wilgar had fallen ill. Now he's a full member and he's also brought the piano man from Killing Floor with him.

This group survived with difficulty, mainly thanks to Lou Martin. Besides, when Rod wasn't yet a permanent member he's repeatedly praised Lou Martin's excellent play.