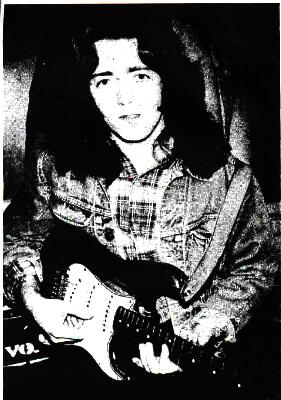 Rory Gallagher looks like a baby. It seems impossible that he could be quite that young....after all, he was in Taste for some time, and has been working solo in England, even if this is his first time round in America. He comes on stage like a little kid, with a diffident manner and an electric guitar, and 'he' is backed by drums, bass and organ. But the first sound out of his mouth is a full volume scream. Rock and roll, and check your ears at the door.

Once he starts singing, the voice is raspy, but pleasant, the words. almost completely unintelligible as they mix with the instruments. In the first song, the only lyrics that could be understood were "I'm a man, Don't give me---" the last submerging into the primordial music. It's primitive, blues-based rock and roll, done with amazing verve and unlimited energy. Just the sort of thing you thought was gone forever.

There's little to be said about Gallagher on a verbal basis. Not only do most of his, words get swallowed in the tumult of the music, the introductions disappear inside a charming Irish lilt that reduces words to, a quieter kind of music. It wasn't until the third song that he managed to articulate that what was coming was Muddy Waters' "Where's My Baby Gone'? Curiously, it was also one of the few times the lyrics came through. No matter. It's an old blues tradition to mumble the words.

Musically, though, Gallagher is a whiz and a wow. Throughout the show, he never slowed down, filling the room not only with sound, but a wonderfully infectious feeling of having the best possible time, a feeling that easily carried over to the audience. He can extract all sorts of sounds from his guitar that are highly unexpected, embellishing melodies that ( maybe) he wrote himself, but are filled with bits and pieces of vaguely familiar songs. Some of the moves are familiar too. A Pete Townsend leap here, a Chuck Berry duck-walk there. Music and moves are absorbed and synthesized into his own work and displayed as part of a heritage that is being joyfully maintained.

About half-way through, Gallagher did a short acoustic set, using as old steel guitar, on which he played some heartbreakingly beautiful slide lines on a classical sounding 12 bar blues, " Too Much Alcohol." Another acoustic song had a ragtime feel. And then it was back to the electric, ending up with the old "Did you ever wake up with Bullfrogs on Your Mind?", the melody of which is better known by it's later incarnation, "Roll over Beethoven."

By the end of the set, my eardrums were worn to a nubbin. Never mind. In this case, volume and enthusiasm, just as Gallagher himself is a prime example of what rock musicians sounded like before everyone got clever. This is definitely not music for the intellect. The sound comes in through the pores as well as the ears, bypassing the brain altogether. But is sends you into the night with a smile on your face. So who cares if you have to read lips for the next two days.


From the Feb. 19, 1976 issue of the SoHo Weekly News
Thanks to Christy Brennan for passing it along
reformatted by roryfan 190