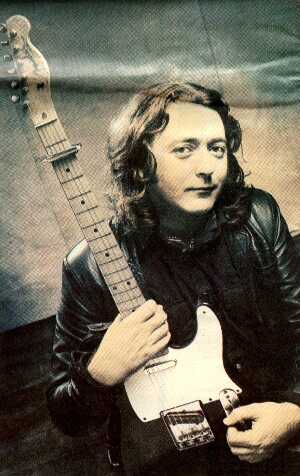 Rory Gallagher is the nice Irish geezer in the photo. He made his considerable reputation as a guitarist in the early seventies, first with the trio Taste, and then under his own name with albums like "Blueprint", "Irish Tour '74", and "Tattoo". He's a blues man, with an ace slide style, a good gruff voice, and a fine authentic ("What a terrible word,") feel to his playing. He's probably best known for his severely beaten up old Strat, although he's a fine acoustic guitarist.

He was big famous in the seventies, but fashion moved on, and Rory didn't. Now it seems that the blues is back (Robert Cray on Wogan!), and so is Rory. Since his last album in 1982, he's been looking for a new deal and making a living (with bassist Gerry McAvoy and drummer Brendan O'Neill) touring extensively -from America to Yugoslavia and back. This has meant snatching time in various different studios to record and mix tracks for the album, which is why "Defender" (Demon) has been more than two years in the making.

"Thing is, I don't just write a bunch of songs, rehearse them then go in and record. Particularly if the music has a really definite connection with the roots, I'm trying to get some of that old magic with modern material in a modern studio."

It's easy to make the patronising assumption that somebody making 'roots' music shouldn't be interested in modern 24- track technology.

"People tend to think that I only want to work on 4- or 8-track ...I do in one way, as I'm not over-keen on that ultra-cleanliness, but by the same token, it's nice to have all these new facilities, gadgets. But when we're in the studio, mentally I still like to start as though it's just a tape recorder taping music, more or less live."

Has your music changed over the years?

"I think I've improved my songwriting, broadened out the themes. Any writer is always trying to avoid the formulas, unless it's something like an old fashioned blues riff that feels great, with a modern theme in the lyrics. Blues is not about sounding like Peter Green, it's everything. ..

"The tone and mood of the new album is blues and angry, but there's a couple of rockers, and a couple that don't fit any category; but it is really a modern blues album."

"The sitar -that was the x factor. We mixed and remixed it, but there was still something missing, so we took the Coral sitar in for a couple of little phrases, and it knitted it together.

"The jingly noise is me shimmying the pick down the strings, like a violin bow with a flange effect; nothing incriminating. Ninety per cent of the music is played with just the amp fairly hot. But I do have a Boss flanger, an octivider, and a Dod analog delay. In the studio, I bring in an old WEM Copycat, and the old red MXR Dynacomp compressor - that's a great gadget, even an old raunchy amplifier will get a bit of nice crispness. "

"My favourite track. It's a rhythmic thing, that I had to keep calm and controlled. There's a sort of John Lee Hooker feel to it.

"The main guitar track is my Gretsch Corvette, which is like a Gretsch jnr, but with the pickup changed to a Gibson P90. I used a Washburn acoustic to add a little ghost.

Slide lead guitar is an old black Fender Esquire -1953, I believe -through an old yellow Fender Deluxe, and the Dod echo. I like using my own echo on overdubs -I prefer to use effects when I'm recording, rather than put them on afterwards, as any time you touch your guitar, you get an extra noise you can't get later on."

" Main guitar was my Eccleshall Telecaster with Gibson PAF's, lead phrases were a white Tele, but the slide was the Gretsch Corvette through an AC30. The sound was basically like an old-fashioned radio blowing up. I don't like fuzz guitar actually, just amps that are getting ready to blow!"

I AIN'T NO SAINT

"This is a kind of Albert King thing. Guitar was a three tone sunburst '57 Strat I rarely use. I've put heavier frets on it, and neutered the middle tone control. It's a very Buddy Guy Strat with a maple neck. Rosewood necks always sound a bit more mellow than maple. You get a different tone tension from a maple neck; maple necks are more snappy. When my old Strat gets steamed up and the neck gets wet, it gets more like an SG.

'"I double tracked an alto sax, though I didn't credit myself with it on the sleeve - got to keep the old ego quelled. I put it down as a guide for a real player, but it held up. And we added a brass tone from a little Casio keyboard, which I did with two or three fingers. I wanted that AC Reed/Buddy Guy stabbing sound."

"Some songs you recognise immediately are going to need production to help them build. This was an Armageddon type situation, so it needed to be built up. We did our best with it. It was the most difficult to put together -it doesn't appear complex, but it was quite fishy.

"I was playing a Gibson Melody Maker through a Boss Playbus, which has surprisingly good, hard snubby sound, and a little Ibanez analog delay thing. And I used the Eccleshall Tele".

You seem to prefer Teles to your Strat these days?

"It depends. I love the Tele sound for rhythm parts, as it's very accurate. You have to work harder -no free gifts. But I put bigger frets on and tilt the neck back a bit, use the lead [bridge] pickup and back off the tone a bit. Lead pickup is 6k on a Tele, compared to 5 or so on a Strat -so it's more honky.

"Rhythm guitar was the Gretsch Corvette. We wanted to build it up without turning it into an orchestra thing, so I added a dulcimer instead of acoustic. Lead guitar was a white metal body Tokai Talbo -a very under-rated guitar. That went through an octivider - there's that inconsistent harmonic in them. And if you play harmonics with your nail as well, you can get all three going.
"Most of my solos are improvised, but you find that if you do it once or twice in the studio, you end up using your own ideas from the first couple of takes. Obviously sometimes you have to sit down and work out what would fit. But often it's the old problem: the more you add the worse it gets."

"The slide sound was the Corvette, done live, through the Marshall, John Cook added vamping low piano, and I put on some country lines on the Strat. If you record quietly with a very sensitive mike, you can get great sounds."

"That was the Strat doubled up, with an acoustic drifting in. John Cook doubled the guitar with a keyboard sound. Over that there are Hank Marvin type country lines on the Talbo".

"The only cover on the LP. It's one of my favourite songs, a very wry type of blues. Sonny Boy Williamson is backed by the Muddy Waters band on his version. We always lay down some blues standard, partly to relax, partly because you never know what will happen. We didn't change it much: he did it slightly slower, and didn't have bass on his version.

"The harp is Mark Feltham from Nine Below Zero, a friend of Gerry and Brendan. I'd liked to have used him for a couple of more tracks, but it didn't fit the schedule.

"The lead was done on a Tele through Mark's harp amp, a little Fender Champ. Rhythm is on an old Epiphone Casino, which has a kind of woolly sound".

"That's the challenge of a European trying to write blues songs -you have to tackle it hard, make sure it's a very good song. I think this is a song that could be covered by an American blues artist. I hate getting into colours, like white/black blues.

"I recorded the track on my own with my foot tapping, a tambourine, and a low electric, a Veillette-Citron, made in New York. It's tuned very low, like a baritone guitar. I used my Washburn acoustic; the slide was a National Duolian. Lou Martin from the old days plays on this one. Lou has that unusual touch with acoustic piano, give it that extra touch of drama.

"I enjoy playing acoustic. ..sometimes I prefer it to playing electric, as you're really close to the instrument -it's very "organic". I use strong strings on the acoustic, which is a great leveller: you can get very fond of yourself playing light strings on an electric guitar. No faking it on acoustic.
"I'd love to do an acoustic album, great fun. I just need material and time -it takes us so long to get organised from one electric album to another, never mind acoustic. But I will do it. Double bass, dulcimer, acoustic guitar ..."

"It was owned by the lead guitar player of the Royal Showband. He wanted a red one like Hank Marvin, so it was in fairly good shape when I got it. I was never really tempted to have it redone -in those days, sunburst resprays weren't so good, and now it's too late. Refinishing things makes sense sometimes, if the worn down version is just non- descript."

Do you mind if I play it?

"Be my guest -I love to hear that guitar played by someone else, because I never really get to hear it properly ." -

The body is down to bare wood almost all over .The nitrare pick- guard (a replacement, but of the right vintage) is green with age, and has been superglued to stop it splitting. The bridge and pickup screws are rusty. Only one of the tone controls works, though this is a Rory adaptation. The rosewood fingerboard has had 4 refrets with fattish Gibson wire. It has replacement Sperzel machine heads (definitely an improvement). The neck feels warm and comfortable, though the action seems very high -the top E and B disconcertingly s0. In fact the top E is almost hanging off the edge of the neck.

"I'll pull the neck back later. The action's up there for open tuning slide playing. The strings are a 10- 42 or 44 Fender rock and roll set. I rarely change the first three."

Rory's Strat isn't as hard to play as I'd feared -I liked the larger frets, and the heavy strings and high action give it a beautiful clear rounded tone. They were only awkward when I tried my best/worst Chuck Berry licks. Is this why Mr G is hot on single note runs?