Rory Gallagher's looking a bit out of place in a rather trendy record company office. If there's one thing Rory's not, it's trendy. Rory's taken off his donkey jacket and scarf and he's sitting in his denim work shirt and jeans almost dwarfed behind a mound of six-packs of Guinness.

He looks like he might well be a lad who's just come in waiting for an interview, trying to become an errand boy for a Polydor executive; he certainly doesn't look like one of the company's biggest record sellers awaiting an interview. He looks slightly ill at ease, almost apologetic at first. His expression is always friendly, but he doesn't look as sure of himself as he does when he's up on the stage and con­centrating on his old and trusted guitar.

On stage, Rory seems to be almost the last of a dying breed  the serious, dedicated and highly proficient guitarist: he's the prototype figure of the old British Blooze boom, but to outlast a trend, you have to be good and hard­working. Rory is both, and really deserves his success.

He's been playing guitar since he was nine, and playing it in clubs since he was 15 and left home, writing songs since the mid teens. It's been honed to a fine point, pared to the essentials, with little room left for chat between songs or any kind of show-biz extravagance. Rory knows what his audience wants, and is currently engaged in giving it to them in a full scale tour   his first dates on the road for a long period, apart from two dates just before Christmas.

It's the first tour to feature the new four man line up (Lou Martin has joined on keyboards; Rod De'Ath, also from Killing Floor, has replaced Wilgar Campbell on drums; Gerry McAvoy continues on bass. Wilgar is now with Mick Abraham's Band).

Rory's glad to be back on the road: "If I stop for more than a couple of months, I get pretty fidgety. Maybe if I was playing more academic music I wouldn't need the vibrations you get from an audience so much. I take our music very seriously, but I wouldn't call it serious in inverted com­mas. I mean Segovia probably doesn't have to tour . . . but it is nice to stop sometimes and catch up with more in­trospective things, like the writing. I seem to write better when I'm back in Ireland. I don't get very much done on tours."

He's got a lot of enthusiasm for the new band: "Rod and Lou both came from Killing Floor, which was a much more derivative blues band, but a very good one. We tend to listen to the same stuff. I've worked with just bass and drums for a long while, even from before Taste, but I've always said to myself that if I saw a good player, I'd get him in, and that's what happened with Lou.

''It's dangerous to enlarge a group just for the sake of it, and Lou plays guitar as well, so we won't necessarily have organ on every track. It's a change but it's not like going from the Old Testament to the New. And it isn't just Lou that's making a difference   Rod's drumming has made a lot of difference. I really enjoy listening to him  he has a delinquent feel to his drumming as if he's doing that instead of stabbing old ladies." 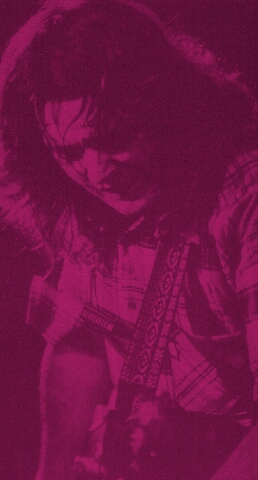 The old ladies of Britain can sleep more comfort­ably in their beds during February and early March, when the new Gallagher ensemble is on tour. The delinquent drummer is in fact Welsh, which makes a change from Rory's usual all-Irish bands. I wondered wheth­er he felt that someone growing up in the harsher climate of Ireland is more natural to feel the blues than we well fed suburban southerners of England.

"I think there's a bit more fire in the Irish character, yes. I think Celtic people have a wide range of approaches, more like the old R & B people. Perhaps there's a bit more grit in Celtic players, but on the other hand, I guess musicians here tend to be steadier; the Irish tend to be very emotional, and sometimes aggressive. Ireland has a great musical tradition as well, of course.

"Everyone thinks it's just thumping beer cans in pubs and singing along, but it's much more than that. There's a long tradition of quiet, lonely types of thing. My parents both played in amateur ways and the Irish naturally like musicians, and at parties everyone has to do something, you know..... sing a song or whatever.”

Rory also feels that a certain type of guy tends to go with a particular instrument, though he wasn't necessarily applying it to his own bands.

“I think bass players usually tend to be easy going, drummers a bit fidgety and neurotic, keyboards players are usually studious, and guitarists are extrovert or extrovert-introvert, a lot use the guitar as an emotional outlet.”

Rory, at least, seems to be a well-balanced mixture of extrovert and introvert, quiet and soft-spoken offstage, dominating on it.

Does he think of himself in any ways as a showman? "I don't think of it as a necessarily derogatory term, but I wouldn't like to be regarded as being as much of a showman, as . . . Ian Anderson for instance, which is not to decry him in any way. I think it would be a drag to be really popular and have to have a halo of sorts. To be really popular, I guess you have to be a bit typecast.

"I'd rather be known for good music, a good show and good records. I suppose you can't stop something from maybe getting too big, but I don't have managers, and that helps. You can't stop stardom, but it shouldn't be for its own sake.''

The main difference between Rory and some more widely-known "stars" is that so many people feel they’ve outgrown touring, and are happy to sit around in the newly-built home studio, and knock out the odd album.

“I don’t analyze why gigs are so important, it’s just that I have it boiling up inside me - I have to play. I just enjoy it and look forward to it. Some musicians, if they’ve got a gig anywhere further than Birmingham, they talk about it as if they were going to be crucified. For me, it’s fun going to Newcastle, or wherever it is. It’s too much fun not to turn up for gigs.

“I feel sorry for the groups starting out nowadays – the club scene has got to be revived. I got used to starting off by lugging amps around and all that: it’s a much more natural birth for a band. Nowadays, they start off with a big record advance and never really have any independence. I think it’s better to crawl up on your own by working the clubs and having a company come to you. Otherwise, you miss a rough time and a lot of fun.” Rory did part of his apprenticeship in the tough clubs of Hamburg around 1965 and ’66.

Chatting over even earlier days in Ireland, Rory admitted his chief enjoyments musically have been Fats Domino, and . . . Lonnie Donegan, who we both agreed had had a pretty rough deal when it comes to mentioning people important to the development of rock here. “He was an early idol and he was doing good stuff. Even in the 50s, he was doing Leadbelly and Woody Guthrie numbers.”

Rory’s keeping that tradition alive. He's got a Big Bill Broonzy number  Backward Blues ( Banker's Blues- j.g.)  in among his songs on the new album, Blueprint; “It's nice to interpret other people's songs occasionally  the ratio now is about 95 per cent originals to five per cent of others, and it's about the same on stage.


“Blueprint was done mainly in the studio with just a couple of lives included  from the Marquee. Important? Yes, every album is important because it shows how you're thinking at a given time. But every record can't be like the Little Red Book.”
From the February 24, 1973 issue of  Record Mirror
Thanks to Brenda O'Brien for passing it along and typing!
photo was from the article..mutated from black & white
reformatted by roryfan