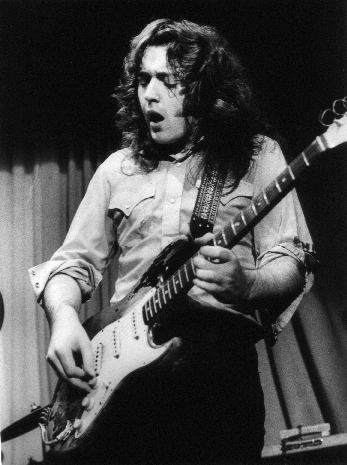 RORY GALLAGHER is a man of the people, any of his many thousands of fans will tell you that. From the top of his unkempt black hair, to his lumberjack shirts, his scruffy Levi's, his sneakers and his beloved battered Fender, he's a musician with a capital M. So when you start talking to him about musical instruments it's no surprise that a glow spreads across his face and his whole body becomes animated, every gesture expressing commitment to music for music's sake.

What guitars have I got?
Well there's the Strat, the Telecaster and I've got this great C.F. Martin acoustic. Another guy picked it up from the assembly line for  me and had just enough money left over to get it back to Europe.

The thing about a Martin is that it takes about five years to play itself in, it has to develop through a whole lot of things like the heat of player's body, the atmosphere it's played in and all that.

Of course the longer you keep it, the better it gets provided you pay some sort of attention to it. When I first got the Martin, I've gotta say that I was a bit disappointed, but as I played it, the guitar seemed to get better.

After about 3 years an average one might become exceptional. I've also got a steel bodied National Resonator. You wouldn't believe it only cost £100. That's a fantastic price. It's brown, an Acolian model it's called, I think. It's the thing. It's the type with just the one resonator.

Then there's my Martin mandolin. Of course, I've had others. There was one with a round back that was really nice to play, but that folded up, it just collapsed in on itself through the heat and pressure on it in planes.

I got another for about £2 in a pawn shop, that was amazing. A really archaic looking mandolin, but it was great while it lasted.  After that I got the Martin because it was a good solid job, you really need a sturdy instrument with all the traveling you do. That's almost as important as the sound you get.

There's a Silverstone which I used on a couple of tracks on "Tattoo". It's nothing really great. I mean it's not particularly good-looking or flash, but it's got a really raunchy sound. I got that  one for $15, that's about £6.

I've got a few other instruments as well, but most of them are just things I've seen in pawn shops and bought out of interest. I buy them because I'm interested in guitars. I love them. But there's a good solid logical reason as well.

I use the other guitars in the studio when the Strat sounds a bit too sophisticated, that's when a cheap guitar sounds amazing, they can sound very good. You don't have to spend a lot of money on a guitar to sound good, it depends on the situation. As I said, a Strat can sound too sophisticated in the sort of controlled atmosphere of a studio. Everything's just so and you find the original sound is too clean, too clever, if you like.

Put a cheap old guitar in the same situation and you've got the dirt already built in.

As for amplification, on stage I use a Fender Bassman, the original which was brought out for bass guitars. The sort of thing that Buddy Holly and Eddie Cochran used to use. They're very loud. It's a strange sort of set-up I suppose, a bass with four by ten inch speakers.

As a spare, I've got a Fender Twin. It's not quite as loud, but it's good if I'm stuck and then I've got a trusty old AC30 in the wings if all else fails.

You know I would never buy a brand new amp. There's just something about an old one. Even the old Selmer amps can be quite funky.

I think the thing to do, for any young guitar player, is to find himself one good amp and stick to it. The guitarist in Queen, has the right idea, Brain May.

He's found that an AC30 is right for him, so when he's found he's got a bit more money to spend on equipment, instead of trading it in for something bigger, but different, he's just added to his original set-up. So now he's got this great set-up using a bank of nine AC30's.

(Gallagher, as one might gather, is a traditionalist so when asked about the production of new and slightly different guitars, he's not entirely in favour.)

There are a lot of new guitars coming out and I don't think that's good, really I'm not against progress or anything like that, don't get me wrong. We were the first to try out the Dan Armstrong with the sliding pickup, we used that on the "Blueprint" album.

But the thing is, the guitar Dan rates as the best ever is the Fender Telecaster, the old one. And he told me that he tries to get his guitars sounding good relative to that. Incidentally, the Telecaster I've got is an Esquire.

Anyway, you find that even though all these guitars are coming out left, right and centre, the kids are using their money to bu second hand Telecasters, and guitars like that. I think it's because they just sound better.

One of the more interesting things to happen to Gallagher in his musical history was when he added a keyboard player, the extraordinarily dexterous, Lou Martin, to his  band. Surely this was a surprise move for someone who had previously stuck closely to the two guitars. drum setup?

"Yeah, that's true. Adding keyboards was just one of these things because I didn't know if it was worth doing or not. But Lou came down for a session one day and we had a jam and worked really well.

"It turned out like that because Lou likes the same sort of music as the rest of us, and more important, he comes from a different sort of school as opposed to the Keith Emerson and the Ric Wakeman's."

"Well I started getting interested when I was very young, about nine, I think. I was interested in people like Lonnie Donegan, Fats Domino, Elvis, Chuck Berry, anything that has a strong beat was all right by me.

"Later, I started getting interested in millions of people and they weren't a  blues-based either. I don't have one idol standing out in front of the others, though I mean there's B.B.King and I like him very much, but he's not an all around favorite.

"I tend to like the people like Keith Richard, now he's a great raunchy player. Maybe it's not such a good idea to have a favourite, although you're bound to when you're younger."

"After a while though you'll tend to turn more to picking up a guitar yourself and having a play yourself instead if sticking on a record instead. That's what the kids should do. I'm not suggesting they should stop listening because that's one of the best ways of learning, but playing yourself is even better."