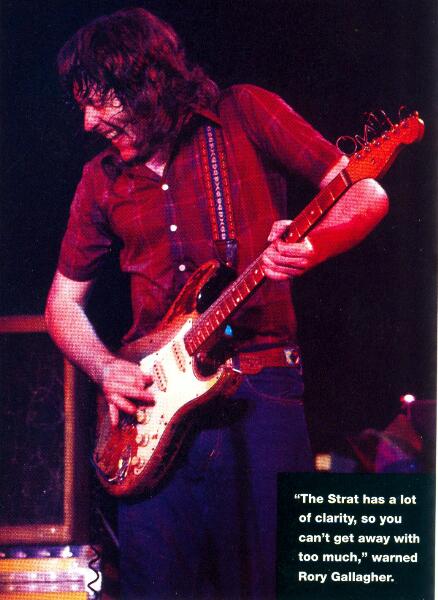 If Jimi Hendrix continued to play the Strat he burned at Monterey Pop, it couldn’t have looked much worse than the battered and bruised '61 model that never left Rory Gallagher’s hands. "It’s superglued together" joked the late, Irish-Blues rocker in a June '91 GP  interview. Gallagher's devotion to the blues was just as deep as his commitment to that scrap heap Strat. His impassioned playing and singing was uncorrupted by fads, effects ( "I like naked guitar") or fame (he turned down the offer to replace Mick Taylor in the Rolling Stones). He could wow audiences with fretboard gymnastics; or hit a single, perfect note that would absolutely freeze time.

"I try to split the difference between being fairly clever and technical and still primitive”, he said. "As a rule, I try to keep a grip on technology, so it doesn't take the human factor out of it."

Tech-wise there wasn't much to worry over, as Gallagher typically restricted his setup to a guitar and one or two-amps. His infamous Strat, reportedly the first one in Ireland, was stock except that the middle pickup’s tone knob was rewired into a volume control.

"I like electronics, sure, but I’m sure into the guitar," he said in the July '74 GP. "I try and get a volume where the guitar still has almost an acoustic nature. You know, if you hit it a little harder, you get a hard note and if you hit quite soft, you can get a soft sound."

To achieve his signature sound ("clangy and stringing without being, too trebly”), Gallagher often relied on an alliance between Fullerton and London. "For me it’s a battle between the Vox AC30 and the 4x10 Fender Bassman”, he said. "The warmth of the Fenders and the character of the Voxes are pretty hard to beat."

"I'm obviously so much a Fender musician, " he continued. "The Strat is comfortable, the scale seems right, and I like having the machine heads on one side. I’m not a great fan of humbucking pickups, and I don't think the sound of the Gibson travels as far. A Fender will hit the back wall. Even playing in a huge band with brass, a Fender might not be loud enough, but it always cuts through. Also, I still prefer to get a wah effect by working the guitar’s tone control manually, and the Strat is ideal because you can easily reach the volume and the tone controls to get that crying sound."

It wasn't all about tone and ergonomics, however. Gallagher readily admitted to falling for the Strat's physical charms. "Buddy Holly had a  Strat, and as a child, you go after the appearance of a guitar. I don't care what anyone says, you look at the shape of the thing and that's it."