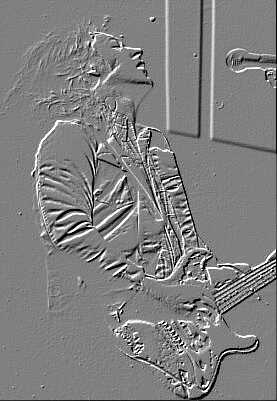 Clubs? I love ‘em. The beer, the smoke.” Rory Gallagher is leaning against the dressing room wall at Richards’ in Atlanta, towel in one hand and beer bottle in the other. He's just finished his first set of a week long engagement, and it's gone extremely well: the Georgia audience had leaped to its feet halfway through Rory’s opener, “Messin’ With The Kid,” and didn't even try to conceal its excitement and delight as Rory steamed through an hour's worth of their music, acknowledging cries of “Awright!” with a grin and an uplifted thumb.

Ten minutes ago, Rory had charged the microphone to scream, “I'm BACK IN YOUR TOWN!!!”—and though it's only a song lyric and Rory’s never been to Atlanta before, the burly Southern audience had made it plain that he can have their city just by putting that Telecaster through as many changes as it'll take. Pretty good, really, for a guitar warrior bred and buttered in County Cork, a lad who refuses to release singles and who still can't headline big halls safely in the States. But Rory Gallagher intends to change that.

It's the third week of a six-week American tour that will split the Gallagher band's time about halfway between club dates and big halls (as the bottom half of the Faces show). During the tour, Rory’s new album is due for American release; it'll be the first one that America gets before Europe, which will see it during Rory’s tour there in October and November. The band has so far found their Southern swing—which takes them to spots like Louisville, New Orleans and Tuscaloosa—comprised of excited houses which may or may not know Rory’s recorded work but will certainly take the trouble to investigate now.

The new album, Tattoo, is on Rory’s mind right now. “I wish I had a copy here to play for you, because it'll sound so boastful to talk about it otherwise.” The person who accuses Rory Gallagher of braggadocio couldn't have spent any time with him; bystanders during all his shows are constantly amazed at the Jekyll~ Hyde  transmogrification that takes place when Rory mounts the stage. From an impeccably polite, considerate, soft-spoken Irish gentleman, Rory gains what must be ten feet in height as he makes for the platform: his soft, boyish features take on a hard, guttural quality as he powers out a guitar introduction, and five minutes later he has one wondering if maybe a surrogate hasn't slipped up to take the place of the quiet Irish lad backstage.

“Any time now, Rory, it'll be out,” says a Polydor promotion man, who has made a cassette tape of Tattoo for Rory’s use. “There's some delay on the sleeve,” says Rory, “but then, there's always a delay on something, isn't there?”

“I'm anxious to have this record out,” he says, “because the people we're playing to think Blueprint is the ‘new album.’ That's older stuff to us. The new one was rehearsed and written in Ireland and recorded in London. as opposed to doing everything in London. ..which seems to have made some difference, really. I haven't done that since the Taste days. Living in London, working in rehearsal studios and the like, sometimes makes you get ahead of yourself. You have things forced on you.

“I'm very proud of it; I think it's the most vibrant of the albums. There's a mixture of forms on it, but it's less diverse than Blueprint. There's not so much a common lyrical feel going through it, but a rhythmic one. It does slow down here and there, but even the slow ones have a slight.. .click to them, you know?” There'll be nine tunes, including one of Rory’s best melodies ever, “A Million Miles Away”—which some of the Richards’ people who were solid Gallagher fans before they walked in found. .different. But there's a slight click to it, you know?

Rory is still unshakable on the singles question. “I don't care to make myself as rigid as I would were I to set out for a single on the radio. I have never thought in terms of singles, but in terms of albums. And I understand that I could probably find a tune that might see some success in that direction, but I'm just not interested. For example, take Blueprint. I could play something like ‘Hot Coals’ all day—I could fill up an album with ‘Hot Coals’ stuff—but my interests aren't limited to that form. I like blues, surely, but I like folk, jazz—I think Taste made some progress in that direction—and even ragtime. I've wanted to do something like Scott Joplin’s stuff for a long time, and that's where the acoustic piece on Blueprint (“Unmilitary Two-Step”) came in, I guess.”

(Rory’s manager-brother, Donald, is more blunt when asked about Rory’s predilection against singles. “He thinks they're Mickey Mouse,” Donald says, and the brogue makes a writer hear it as “Mickie Most.” ‘.‘Same thing, isn't it?” snorts Donald.)

“We like to play,” Rory is saying. “We love the small clubs, and we even like the big halls—because even though you may be intimidated by the size of the hall and the loss of intimacy, when it happens at a concert like that, it really happens. And if it came down to a choice, I’d rather play and not be ‘successful’ than have tons of singles and not be able to play. But I don't think we're doing too poorly.”

Rory has little use for glitter, and to anyone watching his show it's obvious that it would be superfluous:the Rory Gallagher Checked Shirt is as much a trademark as the thundering riff that opens “Laundromat.” “I’d rather not have to come out on stage wearing something outrageous. It's funny, but some people find it odd for a performer to come out wearing precisely what anyone else might wear. But that's how I do it.”

Rory leans back and grins as drummer Rod De’Ath tries to find out how to pronounce the name of the funny Southern town Tuscaloosa. “Just say University of Alabama and you'll get by,” says Rory. De’Ath, bassist Gerry McAvoy, and keyboard man Lou Mar-tin, the Blueprint personnel, are intact for the tour and the new album, and Rory calls them “the best lads ever.” A few Southern polysyllabic town names later, Rory muses about the region.

“I don't think I would say I was influenced by Southern music as a whole, as much as I was by Southern musicians. Though I've never sat down and figured it out, I think it'd be fair to say 70 percent of my favorite bluesmen come from the South.” There's a possibility, Rory says, that he may be recording a live album in the South sometime in the future. “This would be a nice place right here,” he says.

“I like some of your Southern bands,” he says, “and though European blues has been influenced by American—and particularly Southern—-styles, I get the feeling some of your newer bands, like the AlIman Brothers, have borrowed from the British as far as.. .the act goes. The stage, you know. The music is different slightly from British to American bands, of course, hut then, in Britain we're considered ‘slightly different’!”

Rory fits a guitar slide onto his finger and starts warming up for the second set. McAvoy has been tuning, and the two break into a Duane AlIman / Furry Lewis / Leadbelly melange than ends, laughing, as abruptly as it began. “Ah. Your official patented Hollywood Sound,” says Rory. A few minutes later, they're on, they're into the first tune, they're through, and the crowd is roaring again. “A very warm welcome indeed,” Rory says.

The Polydor promotion man sits in the house, beaming. “There are guys from three other record companies here tonight: they just came to watch. I'm walking around saying to myself, ‘He's mine, you sonofabitches! He's mine’!”--TOM DUPREE

Notes:
This article was taken from the December 6, 1973 issue of ZOO WORLD. Mark Stevens passed on through Shiv Cariappa to me. THANK YOU BOTH!!
reformatted by roryfan

You probably noticed that Rory's brother was 'Donald' above. That was the way it was published. I'm told that Donal is short for Donald in Ireland.