Rory Gallagher:
Still valid after all these years
by David M. Gotz

This article is from Record Review April 1980 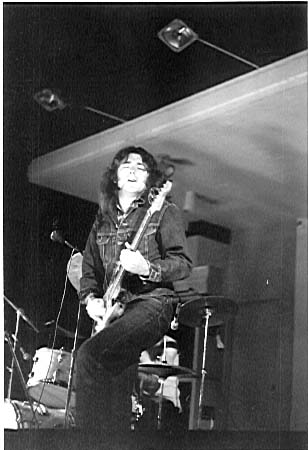 When one speaks of veteran rockers, few fit the term better than guitarist Rory Gallagher, who has been playing professionally since 1965 when he was 16 years old. His first four records were done with a three-piece band called Taste. He continued the three-piece set-up under his own name for another three records, then added keyboards for four more recordings. In 1978 he returned to the power trio stance for Photofinish and this year's Top Priority. Gallagher's new record is solid blues- rock with few surprises, but what is clear throughout is his energy and commitment to this musical style.  His performance is familiar; fine solo breaks, some good hooks -  basic and effective.

Sometimes referred to as "the people's guitarist", ‘ Gallagher has hung on to his lumberjack shirts and Levi's, his battered 1963 Fender Stratocaster and rockin' blues. Although he has also been the butt of cynics over the years, Rory has maintained his musical integrity and kept a loyal following through the many pop music trends. and has every chance of doing so for years to come. It was a pleasure to chat with this soft spoken Irishman. His awareness and sensitivity was captivating and quite a contrast to the explosive energy he generates on stage

So tell me about your new album.

We used the same engineer and studio as Photo Finish, so we were able to settle in quickly and move on. We did four-track demos of some of the songs beforehand which helped the other musicians to ready themselves for recording. But even with all that planning, some songs were still written in the studio. There's a very creative atmosphere in the studio: writing songs in the studio isn't as tacky as it sounds. When you go into the studio - the factory- the working atmosphere is very stimulating. I've written some good songs in the studio. ‘When I say written that's not really true, it's completed, there's always a seed of the songs which was created some weeks before,

We used to go into the studio between tours and bash it out for two or three weeks. I’d do live vocals and live lead guitar, it was very spontaneous. That's fine for straight blues albums. but recently I've tried to be a bit more systematic, we use the studio more. Not to make the sound more sophisticated, but to give ourselves every break possible.

How have the new songs come out on tour?

I was slightly worried that we wouldn't be able to reproduce the songs live, which is a strange situation for me. Several of the songs were heavily overdubbed, but they were fine live. "Wayward Child" has three guitars on the album. but on stage it blossomed into something else, thank heavens. The only song that might have been odd would be “Philby" because of the electric sitar.

You know, that’s my favorite song on the album. How did it come about?

I was reading a lot about Kim Philby, the British spy. I read three books on the trot because I love that whole espionage thing. I guess during the past year I had picked up on a sort of a harassed situation, like he had:  I thought there were some parallels to the rock world. It's a spy song, and he's the ultimate spy. I added the electric sitar to give it a slightly exotic feel, there's some electronic mandolin on it also. I hope to do more songs like that, using more unusual themes.

Is there any Irish melody in it?

Not really, but the solo playing on it is kind of Irish all right, sort of a jig style of playing. It sounds great with the sitar. I must get to do more of that too. The funny thing is that I had to rent the sitar, there are only four of them in Britain. The one I used was rented from Pete Townshend’s company. They used to sell sitars over here in America for $80 or $90 and now you can't find one. When I get back I intend to have a double necked guitar made with a sitar and a six string together. Then I'll have it made.

Over the years you've been criticized for not moving on out of the blues-rock style. How do you react to that?

What's moving on? I wonder what they mean: go this way, go that way, play electronic music. play reggae, play this. play that. Well I just go on doing my own thing, whatever that is. I think it's modern and valid and moves on in its own way. The next thing you get is new wave, and that's not that different, it's back to the basics, which is where I've been all along. If moving on means getting an orchestra in or painting your face, I don't want to know. I think good rock n' roll and blues are timeless, it's not a fad.

We're not working by any rules or restrictions, the new songs we've got have plenty of power and pepper. When you've got that power and the zing, that's the important thing, it doesn't matter where it comes from, where you started or how long you've been doing it. My music is still vital.

How do you feel about being in a three piece situation again?

There's something about a three-piece, you're really back to the essentials, it's very rhythmic and aggressive, and I like that. With keyboards you've got extra texture and all that, but it cuts down the free-form style. I'm happier in a three-piece band.

Could you see yourself as a guitarist in another person's band?

I could, yeah. If somebody needed a guitar player for a tour, and I was free and it was the right situation, I’d do it and it would be good fun. There would be so much less pressure if I just had to stand there and play leads, yeah it would be good fun. But to do it in the long term, I think not. I like singing too much.

There have been many rumors that you might play with the Rolling Stones. What's the true story?

I played with them for two nights in a studio over in Europe, there was no sort of audition in the air, it was just sort of a loose jam situation. With Mick Taylor leaving and Keith Richards getting into trouble, my name tends to crop up.

You've done a lot of grueling tours over past 15 years. Do you ever wonder how you made it?

We did a lot of scatter-brained tours all right. Sometimes I'm rather proud of myself for getting through it all. It was quite a physical ordeal at points, but I was able for it. We enjoyed it though - we wouldn't have done it if we didn't enjoy it. I don't regret it at all. Why should I?