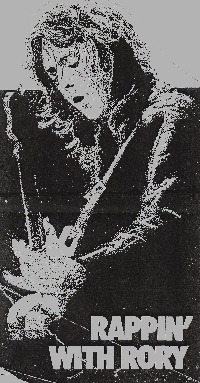 On stage, Rory Gallagher is a bundle of energy. He races round and bounces about as if his life depends on his being constantly on the move, Between numbers, he is almost brusque in his introductions, rushing up to the mike and hurriedly telling the audience the title of the next song with a , "Hope you like it" for good measure. He'd obviously rather let his music speak for him. So it may come as a surprise to know that offstage he is a mild-mannered bloke who considers every question carefully before giving his answers, and who seems genuinely modest about his own achievements.

We began by talking about the current lack of guitar heroes, as opposed to the heyday of Hendrix, Clapton and Lee, I suggested to Rory that perhaps the strain of having to pull off superhuman feats of guitar wizardry all the time has become too much for some of these players, resulting, in Clapton's case, in a series of more laid-back albums. How did this affect him?

"It all depends on the personality of the player, I suppose, Personally, I never took it as seriously as Clapton, but this adulation gets to most people in the end. Look what happened to Peter Green and Jimi Hendrix. Jimmy Page seems to take it all in his stride, though. I think you have to remember that Clapton was a guitar hero before Cream formed, so he has been putting up with all the adulation for much longer than people think. I expect he'll get back to his usual thing soon. He's doing what he thinks is right, and that's the important thing."

Rory has a new album. Against the Grain, released in this country, and we began to talk about this. When I spoke to Rory, the recording was finished, but the mixing had not yet been completed. "We've been recording it for the last month, and it was the longest album in terms of recording, that we have done. It is the first album we have done in two years, so obviously the band is now more together and relaxed. The music is really running away with itself, it's much more cohesive."

Had Rory included any surprises in the way of acoustic numbers on the new album? "It's strongly biased towards the electric side, there are ten songs on the album and only one is totally acoustic, although even that has organ and tablas on it.

Rory produces his own records. How does he feel about producing and producers? "I'm not anti-producer; if I found the right person to produce my albums I wouldn't mind experimenting, but at the moment I'm happy as I am. I work very closely with an engineer, Robin Sylvester, so a lot of the actual sound problems are dealt with by him. You have to remember that there is a lot more to producing than people think. You have to decide which tracks to leave off the album --you might have a fantastic song which is too long maybe or a red herring in some way--there are a thousand and one problems to be overcome and which a lot of people don't realise. On the whole though, I don't find producing any trouble at all." 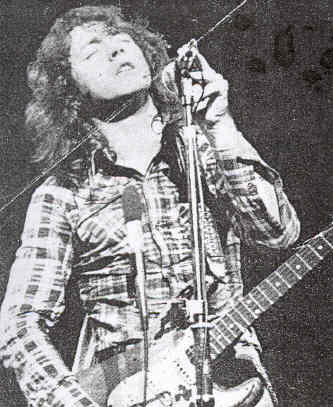 What equipment was the band using at the moment? " Lou Martin uses a Wurlitzer piano, but he's such a heavy-handed player that he keeps breaking the keys! For a while he was using a Farfisa organ, but now he's using a Hammond, and for the American tour we'll be getting an acoustic piano as well. He uses Stramp amplification, though sometimes we use P .A. amps for the keyboards because they give a more brittle sound. Gerry has a Fender Precision Bass with a maple neck and Stramp amplification and Rod uses Slingerland drums."

Rory himself, of course, still uses the trusty Strat. Although he has always used a Telecaster for slide work, he was thinking of getting another Strat for this purpose, and all the slide on the new album was performed on a Strat. Rory explained that the reason for this was the fact that the Telecaster has one really fat pickup and one really thin one. "But I like it. It's got a nice mellow sound. You see, I don't want to go to the extreme of putting a humbucker on the Tele because I'd have a kind of Gibson/Fender then."

Rory uses a Fender Bassman amp with four ten inch speakers. He also has a spare Fender Twin beside me in reserve, which he uses as a monitor, or for playing harmonica through. Among his other guitars, Rory also uses a National Steel, a Martin D35 acoustic guitar, and a mandolin. He likes using mandolin but finds that it is difficult to write songs around. Had he ever written a song on the guitar and transposed it to mandolin?

"Yes, I think I wrote Going To My Home Town on a guitar and used mandolin for the actual performance. I've a mandola as well, which I like to use. It is the same relation to the mandolin as a viola to a violin. I find it an easier instrument to play because it is larger. I like to experiment with instruments like that."

What sort of music does Rory listen to in his spare time? "Well of course, I still listen to the old blues masters--I'll never tire of them. I've been getting into Little Feat recently and I'm a big fan of John Hammond, the American singer. I also like a lot of folk music-Martin Carthy for instance."

I asked Rory if he had ever been moved to do a traditional song in this mould. "Oh yes, I'd like to do some," he says with a laugh, "but there aren't any left 'cause Steeleye have used them all! No seriously, that influence creeps into my songs anyway, even though it's partly disguised. On the new album I do a Leadbelly number called On a Western Plain and the tuning for that is a Carthy type tuning which has totally transformed the Leadbelly song from a twelve string number into a far more folky sound. I did another song for the album, which we didn't use unfortunately which was in a D modal tuning. I like to use these tunings to obtain a more raw, folky tone." What advice would Rory give to a youngster who was buying his first guitar?

"Buy an acoustic guitar first and learn to play on this for about a year or so, so that you don't get lumbered with the extra problems of amplification etc. that using an electric entails. Don't use ultra-light strings and don't necessarily use the most popular guitar on the market. There are a lot of really good unfashionable guitars about. Hofners are a good example. I heard the other day that Hendrix played Red House on his first album on a Hofner, so there should be no reason why anyone shouldn't be able to get a decent sound from one. In the field of amps there is the AC30 which is a superb amp, the Watkins Dominators are other good buy."

Had Rory any other tips for young players? I asked him how he got that high pitched squeal which he manages to squeeze out of his axe at odd moments. "You have to hit the string really hard with both plectrum and the nail of the forefinger on the plectrum hand, while at the same time bending the string as much as possible with the left hand. It's a  technique that has been used for years in various ways by all kinds of people. It's a sort of harmonica bent harmonic if you like!" 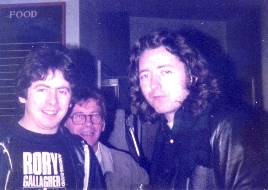 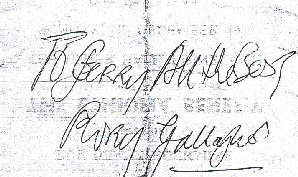 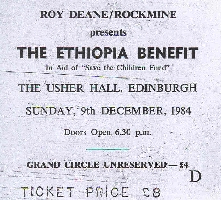