Gallagher - Doing It The Quiet Way
by James Johnson

JUDGING FROM his alert eyes and firm handshake, it seemed that Rory Gallagher's
recent four month tour of the States took about as much out of him as a one-nighter down the road.

In a way, it's no surprise perhaps, because one of the most remarkable things about Gallagher is simply the way he goes about his work. He likes to keep things tight and, to a certain degree, business-like  — which means there's no wasted energy.

His whole set-up is almost a folksy little operation. He doesn't have a manager, doesn't employ a press man.  His brother drives the van and any hustling that has to be done, Gallagher handles himself he says. "If you're not careful you can end up with a whole harem of people you don't need and don't know what they're there for except to get you out of bed or something."

Basically, Gallagher's into being a musician rather than a star. He cares about music, his own and music in general....and can say without under-valuing his ability that the guitar for him is just a childhood hobby that's grown.

Naturally, therefore, the stresses of a five week American tour that ended up lasting four mouths didn't worry him unduly. "There's no point in letting the sickness get you down," he explained, "The only thing to do is enjoy it."

"Probably if a band is at a low ebb socially, or not physically at their best, America could tear them apart. Also I feel there' s a little bit of laziness there. When guys go out for a four week tour and then their manager or somebody wants then to extend it, everybody tends to feel they ought to collapse at the thought."

"It's psychological tiredness, if anything. Obviously all the hotels and planes can tire anybody, but we treated it like a holiday in some ways and made the best of it. Luckily it clicked. There was no sweat and in a way, it had a nice toughening effect on the band."

Apart from being able to play the concert halls, Gallagher was pleased to get a chance to play in clubs often the same place for several days at a time.

"If you just played concerts month after month, you eventually become a little soulless, I think. When you play clubs for a few nights you get all the local people coming up to talk to you afterwards telling you what happens in the town, and who plays there and it can really invigorate your music. To me that's what touring's all about. It's not performing to people divorced from them all the time; it's getting to know them, walking up to the bar and having a drink like everybody else."

He continued. "No matter how mad music gets to me it should be regarded as folk music in a sense. I don't play folk as such, but I like to keep a folk musician's attitude towards it, talking to and learning from people."

"I suppose it depends a bit on the type of music you play. But my style tends to suit that and I've seen people play my sort of music, who fall into the trap of just doing performances. To my ears their music takes on a strange sound: the humour goes out of it, y'know, the sharpness, the click."

Since Gallagher last played in Britain, he's changed drummers- Rod de Ath for Wilgar Campbell- and added a keyboard player, Lou Martin. Although at first it would seem a fairly drastic switch in lineup, he says the past formula hasn't really changed. " I never insisted on just having bass and drums" he explained. " I was always open, but I wasn't going to add somebody just for the sake of it. I didn't want to end up with a big Hammond or with something that would totally change the sound. The important thing with Rod's that basically he's a pianist so he's got all the right rhythmic feel."

"Essentially I'm a solo artist, but against that the band has an identity of it's own. The basic act hasn't changed, but I do feel the music now has somehow become stronger."

"Lately I've felt personally I've gone through a kind of new birth. It's not just the fact of having new musicians... maybe it's doing such a huge amount of gigs, it's like a primal experience maybe. You know you get so tired you have to pull out all the stops and start again."

"Previously I hadn't lost any enthusiasm, but I felt I'd reached the top peak of energy possible. Now  I've found there's even more satisfaction than ever before."

Talking about America, Gallagher had earlier mentioned he'd seen Albert King. Gallagher, of course, has always been heavily influenced by various blues players, yet, as a guitarist, he's one of the few British blues players who hasn't seemed too interested by the King style.

" For me,  there's too much single note playing," he said. "Rather than say, string bending, I like playing chords and picking as well...perhaps a bit of Eddie Cochran feel."

"That particular King Style of playing is almost...I don't know...a bit predictable perhaps. There shouldn't be one essential style of guitar playing, music has got to move on and it won't if everybody just plays single string modern blues all the time."

Since he's been back from the States, Gallagher's been recording a new album due out in February. Apart from the live LP released earlier in the year he's never sold quite as many albums as might have been expected from an artist of his stature Still, he sees no reason why the one shouldn't do better.

"I don't think the last one was necessarily a success just because it was live. People automatically assume that — but they forget the side issues like the timing and the number of gigs we'd played before it was released."

"This new one, I feel, is more accomplished and there's an excitement in the studio sound. Its worked well in every sense."

SO, FINALLY, WHAT can audiences expect from the gig he's playing here before Christmas? Gallagher indirectly states some basic musical beliefs - “it'd be easy to answer that and say: ‘Big  surprises. Watch out. I'll be coming on playing in a pair of skates, but that means nothing to me. Just a new gimmick. I know it sounds unexciting to print, but I'm not coming on stage playing from a trapeze or something."

"It's the music that's important. The new wave of playing, the new feels, what I've picked up in all the months of learning since I last played here. You know, that's  really all a musician can ever offer."

This article come from New Musical Express  12/16/72.
Many thanks to Craig and Kim Stamm for digging out this article through their library sources.
reformatted by roryfan
background is a capture from Rock Goes to College 1979. Pilfered by donman 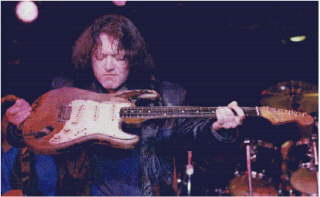 Thanks to Patrick Kennedy for this photo he took at Huntington Beach, CA in 1991
48