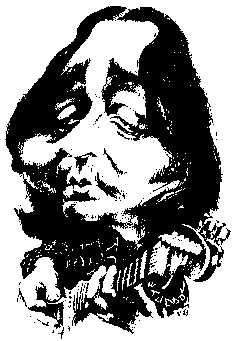 Praying at the temple of the blues
by Michael Ross


In the airy loft of the Guinness Hop Store last Wednesday, Rory Gallagher stepped out to face a workshop for young guitarists, his first Irish audience in over four years. Beforehand, he worried, as he always does, if he would still be liked. It might seem a peculiar worry for someone who has been received rapturously here for over 20 years.

But when people feel vulnerable, as Rory Gallagher does, they can fear even the most unlikely occurrence. As he walked out in front of the few dozen admitted to the class, he feared that someone would remark upon his low profile of late, or upon his unhealthy appearance.

He need scarcely have worried. He picked up an acoustic guitar and introduced the first of the handful of songs he performed. It was Walkin’ Blues, written by one of the oldest of the original Mississippi bluesmen, Eddie Son House, 70 years ago, and recorded by the most influential figures in blues, Robert Johnson and Muddy Waters.

It was a most appropriate choice for Gallagher. One of the leading modem interpreters of the blues, and a man upon whom a sense of music history weighs very heavily.

When he finished, the audience applauded warmly. Gallagher, whose career making strong, fluent music has been punctuated by many bouts of crippling indecisiveness and lack of confidence, looked grateful and relieved. For the first time in a long time, he remarked later, he felt that the gods were with him.

The past few years have not been kind to Rory Gallagher. He has felt unhappy for reasons he is unable to specify. He has done little work, has felt that his standing as a musician has diminished, and has suffered health problems which have seen him gain a great deal of weight. The Hop Store appearance and his concert last night in Dublin's College Green were chances to show that he is still musically potent and has not become, as recent reports have suggested, an alcoholic casualty.

This recently touted image of Gallagher as a broken and bitter man sits particularly uneasily, given the long-standing perception of him as an intensely private, but amiable and generous musician with an ascetic dedication to an unusually thankless area of music.

His attachment to music sprang up in Gallagher at a very young age, nurtured by his family's interest in traditional Irish music and his life. There have been friendships, there have been relationships with women, but the only close and constant companion has been music.

His late father, Danny, played accordion with a group in Cork, where the family moved when Rory was a baby. His mother, Monica, sang. Rory had little interest in Irish music. With his first guitar. which he got at the age of nine. and which he still has, he played rock ‘n’ roll songs at Pioneer rallies.

There was no record player in the Gallagher's house, so it was the radio which sparked Rory’s interest in music. He and his brother Donal, two years younger and Rory’s only sibling, spent their evenings listening to Lonnie Donegan. Elvis Presley and Buddy Holly.

One evening in particular, though, still stands out in Gallagher's mind: the first time he heard, on the Armed Forces Network the stubborn sound of Muddy Waters playing the blues.

Blues evolved from gospel music in the late 19th century as the secular music of Afro-American sharecroppers in Mississippi and Louisiana. in which they expressed their suffering and their struggle to regain some pride.

It was certainly a different world from the Cork of the 1950s. But blues was a state of mind as much as a musical form: the style could be imitated, but without the feeling it could not be played properly. “It has every kind of shade in it,” says Gallagher, “quietness. sadness, violence, and that's why it's so draining.”

As soon as he could, at the age of 15, he bought an electric guitar, a 1961 Sunburst Fender Stratocaster secondhand for £100, which he uses to this day.

There were few blues bands in Ireland at the time, and none with room for a 15-year-old, so out of frustration Gallagher joined the Fontana Showband. The regimented dress code and the monotonous music of the showband circuit aggravated Gallagher, who pushed the band in the direction of the English beat groups and got them to change their name to Impact.

But although the name and music changed, Gallagher continued playing the same circuit as before, enduring the same complaints from promoters about his clothes and long hair, and he lost interest in Impact.

“He was headstrong even then,” says Johnny Campbell who drummed with Impact and has remained Gallagher's closest Irish friend He always knew what he wanted and it was never simple.’
Throughout his four years with the Fontana and Impact, Gallagher was never leader of the band. To get what he wanted he started his own band, Taste, with two Cork musicians.

Gallagher finds the impersonal nature of London attractive. He regards the city not as a home, but as an exile. He says he would like to return to Ireland, although acquaintances say that is unlikely as it would expose him to the possibility, however slight, of rejection.

Taste recorded four LPs and achieved considerable fame. Little of the money generated by the band, however, found its way into their pockets. Suspicions grew into hostility, and at the end of 1970 they disbanded. Since then Gallagher has kept his bands at a distance, as employees or collaborators but never equals.

It was only in recent months that the business affairs of Taste have been finally sorted out and good terms established again by its former members.

His brother Donal has managed him since then. “He is a disorganised person, says Donal. “It causes problems for him, but he's inclined to think they are bigger than they really are.”

The Rory Gallagher Band. formed after Taste, with Gerry McAvoy on bass and Wilgar Campbell on drums, toured relentlessly and made six LPs in four years. He was easy to work with, according to McAvoy: there were strains, especially in the studio, but Gallagher was on top of the job, even if he didn't think so himself. Building on the work done by Taste, Gallagher established himself as a strong live act across Europe. In a career notable for its lack of momentum it was an unusually productive period.

Part of the reason for his lack of momentum has been Gallagher's absorption in even the smallest details of his work. He writes, performs and produces his recordings, and gets so consumed by them that he frequently turns against them.

Two entire LPs have been scrapped. With the others he has thrown songs out, rearranged others, remixed them endlessly, completely unable to rely on the judgment of others and barely able to rely on his own.

He has been hindered also by a fear of flying, which he traces to the death of Buddy Holly in a plane crash in 1959. The fear became acute in the mid-1980s after a small plane carrying Gallagher's band to a summer festival was tossed around in a storm over Norway. The plane landed safely its occupants unharmed, but Gallagher's nerve was shattered. He finally came to terms with his fear by undertaking an intensive tour of Japan and Australia two years ago.

There were other problems. A strict attitude to not eating before shows led to him losing his appetite and getting run down. His sleep was disordered. He became preoccupied with horoscopes.

The high point of recent years for him was his 1987 LP Defender, which showed that he had grown considerably as a writer. More than ever, it was a success pulled out of a crisis. “All of a sudden, over a couple of nights, something came over me, which wasn't entirely pleasant, a scary thing. I felt I went over a bridge. I didn't know what was going to happen.”

His belief in God, which he finds comforting, was not enough: what got him through the crisis was a renewed commitment to the grinding business of recording, and to trying to progress blues beyond Muddy Waters and Robert Johnson.

There are, he acknowledges, things missing from his life. “Everybody wants other things in their lives, but I don't dwell on that.” He has never married, and lives alone in Chelsea. He reads the Irish papers and keeps his radio tuned to RTE.

Recent mutterings that he has a drink problem have wounded him. For a man who, even though he holds himself with dignity, is evidently in distress, it is an especially cruel suggestion.

He takes a drink, but does not, he says, have a drink problem and does not take drugs. Not only that, says Johnny Campbell, but he has become quite abstemious about alcohol in recent years.

He would like to relax but is eaten up by the need to write and by the feeling that he ought to be doing more. He should, he says, be happy. The things he wanted when he was younger he has mostly achieved. It would be more than enough for most people.

It would be easy for Gallagher to appear as a rich white man with the poor black man's blues. It would be easy also for him to live out the hackneyed, booze-addled lifestyle which is supposed to accompany the music. But there is an optimism in Gallagher which keeps him going through the bad spells; and it is this which keeps him focussed on getting something new from the blues.

This article comes from August 16,1992 issue of The Sunday Tribune.
Thanks to Barry McCabe for passing it along.
Article reformatted by roryfan
Background is a 'donman' capture from Montreux '79 mutated by roryfan