“O F COURSE I can still remember my first guitar!” beams the man. “It was a Rosetti Solid Seven, and I've still got it tucked away somewhere at home back in Ireland.”

Rory Gallagher is a self-confessed guitar enthusiast pure and simple. I mean, the man probably sweats Fast-Fret (a fluid used by guitarists on the fretboard as a lubricant. Its purpose is to increase their speed of play) and the thought of him possibly forgetting about the first guitar he ever owned is swiftly dismissed to the realms of the unthinkable!

“After the Rosetti, I had a Hofner Colorama that was on loan to me, but my first proper model was the Strat,” continues Rory. “I was mad about it because I was a big Buddy Holly fan at the time, and to have a guitar similar to his was quite a big thing for a 12-year-old kid.”

Ah yes, that famous Strat, the man's trademark for so many years along with these checked shirts. The shirts may have ceased some time ago to be part of the Rory stage persona, but the Strat most definitely remains.

“Yes, I still tend to use my Strat most of the time, although I've had to have everything on the guitar re-done because I've played it out. I have a ‘57 Strat as prime back up (note: Rory’s original Stratocaster is a ‘61 model). Actually, I'm starting to use the ‘57 model a lot more these days because it allows me to be a bit more precise. 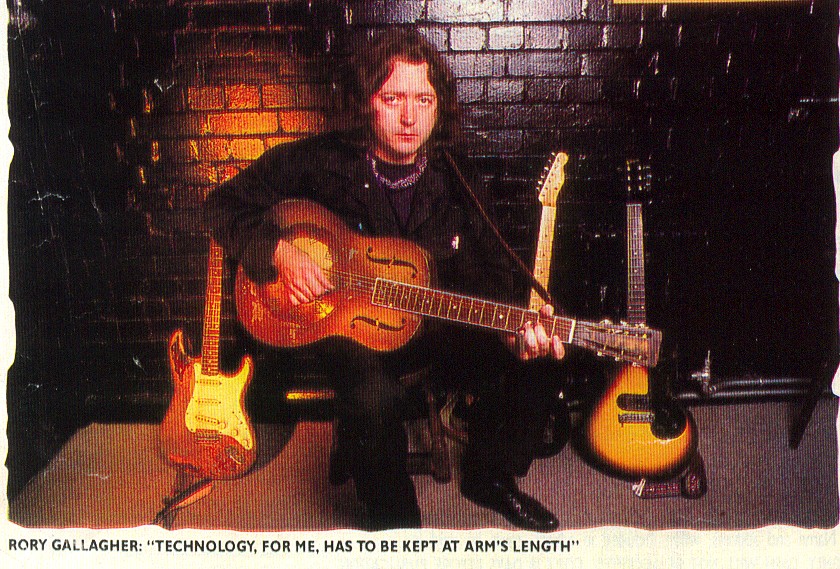 “On stage I also use my white Telecaster and a Gretsch Corvette for open tuning. In addition, I possess a Gibson Melody Maker for chunkier numbers, but when I'm on the road, I like to limit myself to three or four guitars rather than hawk a whole bunch around.

“When it comes to amps I tend to vary things about every six months. I started with a Vox AC30 combo, and that model is still in my set-up, but I go through different phases when it comes to the other amps I use. At the moment, though, I'm still using my Vox AC30 with a Vox 50-watt combo as my third amp. My second amp is a 4 x 12 Marshall speaker cabinet with a converted 100-watt bass amp, on loan from Gerry McAvoy (Rory’s longstanding bass player). I really only use the Marshall to give my sound some body because I usually hear myself through the Vox for the most part.”

Reknowned as a no-frills, straightahead player, Rory Gallagher is not perhaps someone whom one would readily associate with the vast amount of guitar gadgetry available on the market these days. So, what does the man swear by, to enhance that raw, Strat-a-Voxian sound?

“Gadget-wise, I have a D.O.D. Analog delay, which is just a real old-fashioned thing with three knobs on. I also have a little booster on the Vox because I don't use the ‘brilliant’ input on the Vox amp, I just use the ‘normal’ input.

“I also have some gadgets out front, although I'm still very wary of them. I’d say that 95 per cent of the time I play straight through the amps. I do have a Boss Octave unit, which is nice even for slide work. I also use a Dynacomp sound compressor, that is on almost all the time, to cater for the long guitar lead wire that I use; this acts as a signal booster as much as anything else.

“I also use an old Ibanez Tube Screamer (distortion pedal) for my more manic solos, but it tends to he more of a tone booster rather than a fuzz unit. My last bit of equipment is a Boss Flanger, used very rarely to pad things out in a couple of places.”

In these troubled days of Aciiid, sampling and MIDI-technology Rory Gallagher almost appears as a crusading rock ‘n’ roll purist, refusing to sacrifice a feel and tone that he has spent nigh on 20 years perfecting in favour of a more commercially attractive alternative. But would the man consider using new technology in the manner that, say, ZZ Top have done, for instance?

“‘Actually, ZZ Top supported us out in the States years ago, and they were a very basic outfit back then. When it comes to their more modern stuff, I think they peaked in technological terms on the ‘Eliminator’ album; ‘Afterburner’ really isn't all that good. I think that there's a limit to what you can do with MIDI stuff and sampling. ZZ, I suspect, would now want to try and come back down the road and steer away from their almost Blondie-like beat overlayed with heavy guitars.

“When it comes to electronics, I tend to prefer the early things that guitarist John Martyn did with echo, or listening to stuff like German band Kraftwerk, but when it comes to rock ‘n’ roll or blues you have to be very careful. At the moment,  I'm at the opposite end of the scale, and we may even go back to just using a four-track studio set-up on the next album, depending on the engineer we use. Technology, for me, has to be held at arm's length.”

Thanks to Annet & Klaas Spijker for passing this article along.
From RAW Magazine November 1988.
reformatted by roryfan
The background was created by mob. 78