The Irish guitar demon has put on a little weight, a little age, and he's showing a little wear and tear on the voice these days- but he sure proved that he's still got it during his March 9th gig at the Roxy. Playing a type of music that brings to mind, at least for me, high school days in huge auditoriums, watching four or five bands (all of whom you wanted to see), as a cloud of marijuana smoke hovered in the air...well, you get the idea.. .Gallagher and his band recreated the concept of an electric blues power trio (think Cream; the Jimi Hendrix Experience) as though they've been perfectly preserved in a time warp for the last two decades. Rory's got all the clichés and moves down pat; the darn thing is they don't look like clichés in his hands, which is a testament to his remarkable talents.

And at a time when- good God!- even ZZ Top is using canned backing tapes onstage, you at least knew that what you were seeing at the Roxy was what you were hearing. It was a pretty tremendous noise, including an acoustic segment during which Gallagher made a 6-string guitar sound like a 12-string. And so what if the group- which included Rory's longtime bassist Gerry McAvoy and drummer Brendan O'Neil (who were occasionally supplemented by a blues harmonica player)- stuck to a set list that wasn't that much different from their set list of eight years ago? (Gallagher hasn't toured America in at least six.) Only two songs were from his new I.R.S. LP (the label plans to reissue his entire catalog on CD this year); but Rory seems to know that his die-hard fans might riot if he fails to perform classics like " A Million Miles Away," or such crowd-pleasers as Leadbelly's "Out on the Western Plain" and Junior Wells' "Messin' with the Kid." Besides, the man never plays the same solo twice...and listening to great, great songs like "Bad Penny" and "Shadow Play" made this fan once again wonder why he never became a staple on FM radio. Probably 'cause he's too nice of a guy. Whatever the case, Rory Gallagher may be the last great guitarist to recognize- and to totally demonstrate the connection between the blues and brilliant hard rock music.


The Roxy was absolutely packed for this show. People tell me there may have been a few more on hand for the Clash during the early '80s,' but I've never seen the club this full. (I'm surprised the fire marshal didn't create some problems.) But the heat made it a perfect environment for the fiery performances onstage, and I don't think I've seen that many people playing air guitar in one place since God knows when. Those in attendance ran the gamut from at least three of the Smithereens (including leader Pat DiNizio) to Duff and Slash of Guns N' Roses. Slash, in fact, 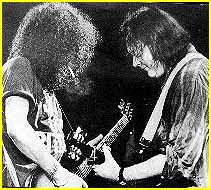 joined Gallagher onstage for a final encore rendition of "Bullfrog Blues" and a terrific Chuck Berry medley of "Nadine" and "Little Queenie." But although Slash is one of my very favorite guitarists of the last five years, even he was outclassed by the great Mr. Gallagher.