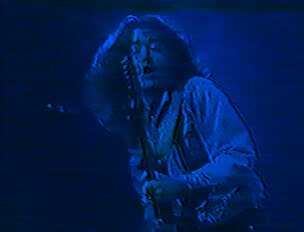 The first time I became a Rory fan was when I heard the song " For the Last Time", I was hooked. I named my son after Rory in 1979. I met Rory several times and always made him an Irish flag of some sorts when he came to Detroit.

One year he played Harpos on the east side and little Marianne pushed her way to the front to give him the flag. When I neared the stage I tried to reach up, but I am short and had to stretch. Rory saw me struggling and leaned down to grab the flag. Just then some jerk shoved me out of the way and extended his hand out for Rory to shake. Rory pushed it aside and got down on his knees and took the flag and draped it over the amp.

After the show I waited outside the backstage door. He came out and went right up to me and said "Thanks a lot for the flag", and planted a big kiss on my lips. I was floored, so I thought well nows my chance and I hugged him and kissed his cheek. He made my husband, at the time, jealous but Ken (my husband) said " If that had been any other man but Rory Gallagher I would of kicked his ass".

My story doesn't end there. We were the only fans to wait to see him after the last show he ever did in Detroit, and it was after that meeting that I was inspired to write the song for him called "Hero From the Emerald Isle" in 1991. I had always hoped I would be able to give it to him  one day. I ended up giving it to Paddy Maloney of the Chieftains when I sat in with them. He told me his daughter used to babysit Donal's children.

When Rick Oppegaard did the tribute tape of Rory's songs I did not want to send him that one because I did not want people to think I was taking advantage of Rory. He called me up and said he wanted to put it in the tape and reluntantly I agreed. In the following months and years I got great comfort and communication from Donal and the Gallagher family and his friend Patrick Kennedy, Duana Horner and countless other Rory fans all over the world who have written me letters and sent all sorts of things for which I am truly grateful. I have an extended family and when I finally make it to Ireland one day, I am going to drink a toast of Bushmills and Guinness to my Hero, Rory Gallagher.

Marianne Murphy is a member of a group called Brigit's Fire that performs Celtic based music. Clips from their CD can be found on the website      http://www.brigitsfire.com/

The original story on the Tribute tapes can be found on Volker's site at http://www.rory.de/tritape.html

***Rick Oppegaard has cleaned up the original cassettes of the Rory tributes and posted them to
http://www.phattydomain.com/rory.html   These can be downloaded in MP3 form. Give them a listen!