Gallagher: Blues and A Lifestyle 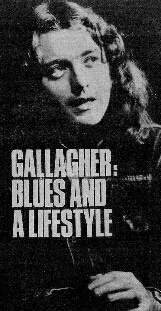 Stardom has got out of hand. A lot of guys see themselves as movie stars, and that's dangerous
A LOT OF musicians stop touring after they've made it, preferring the relative comfort of the recording studio and a house in the country to the hassles and traumas of being on the road.

The Beatles stopped touring long before the split and only McCartney has since committed himself to getting back on the road. Others prefer to do the occasional tour once or twice a year, depending on state of mind and money. And some just disappear altogether.

And can you blame them? I mean, it's no joke being on the road nine months out of every 12, putting up with bad hotels and greasy food, wondering when you're ever going to make it home again.

See the world? All a band sees is a hotel room and an airport. It doesn't matter whether it's Detroit or Derby. But, say what you like, the road does have its merits, as one of Britain's hardest working musicians, Rory Gallagher, points out.

“I think that the healthiest thing for a musician is to stay on the road as much as he can. It's one way of keeping sane. If you sit around London just talking to music business people you get clothes conscious and image conscious.

“I'm not preaching - people should do whatever they like - but the road is good for my type of music. It wouldn't be so bad if I was just a pop musician or a pop artist. For me it's a personal outlet as well as a professional career.”

Gallagher was sitting in the plush Polydor offices in London looking no worse for wear after the 25 date British tour he's just completed. The next day he was due to leave for Belgium, where he's opening a six-day European tour. In between that and his next Stateside trip - a gap of a few days - he might just snatch a couple of days rest back in his native Ireland.

In contrast to our surroundings, he was dressed in statutory denims and, you guessed it, supping Guinness. He asked me how I liked the previous night's Rainbow gig, and without hesitation I could say I was knocked out.

Y’know, Gallagher has to be one of the most level-headed people in rock. He ignores hype and leads his own life, putting music first all the time. If you ask him about his amazing work rate, he says it's not a question of him being the hardest working - just that everyone else is getting lazy.

“I'm only doing the norm, I think. I could work harder.

“There was a time when my work rate was regarded as standard. Regular touring was a standard thing. I'm not going to change that just to suit fashion or whatever.

“Obviously I think of a layoff sometimes, but I do enjoy the tours. Sometimes you feel a bit tired, but you also feel more alive because of the energy you've gained and the things you've learned and how the band played and everything else.”

The recent tour was the first time on the road with his new band consisting of Rod de’Ath (drums), Lou Martin (keyboards), and Gerry McAvoy (bass). He's pleased with the way they've been playing and glad that they - as opposed to Rory Gallagher - are getting some attention.

“People go along to see them not as opposed to me, but as a separate thing. Ultimately you'll probably have some guys go along to see the drummer because they like him and they might not be that crazy about what I play - but that's healthy.”

Did he see himself as a solo artist or as a band?

“Well, as a solo artist with a band, but not a solo artist in the sense of, say, Cliff and the Shadows. It's not that kind of divorced thing. It's like B B King and his band. He uses the same guys for a long time and they become known as personalities and musicians.

“It's better than the strict format of, say, a band called the Apaches or something where you're contracted to play with someone for X number of years and there's no looseness there.”

It's the first time he's worked on the road with keyboards. Has the addition had much affect on his, playing?

“Oh yeah, a little bit. But I play the same basic thing whoever’s in the band. Lou’s not just a keyboard player though, he's a blues pianist, so he's giving me the blues in his piano.”

Although Gallagher's roots are firmly entrenched in the blues and rhythm and blues, he wouldn't like to be known just as a blues player.

“I want to be known as a writer, a singer and a guitarist who plays blues - rather than being just a blues player. I'm not dictating that everyone listens to the blues because not everything I do on stage is blues. I do things that rock a bit and things that are folky and other elements creep in.

“That attitude where you had to play 12-bar blues all night is dead. That was unhealthy, because if you don't take chances with the blues or music that relates to the blues you get nowhere. You have to keep moving on even if people are delighted when you walk on and play straight old-fashioned blues. You've got to write your own blues and your own music.

“In 10 years time, it's more important to have Rory Gallagher music as opposed to just blues. Rory Gallagher's bluesy music is a better word. The important feature of the night should be that he played a nice blues or all the songs were infused with a bluesy feel.

“I'm not trying to shrug off the blues. I love the blues. It's the main ingredient of my playing. But two years ago to be a blues player you couldn't play certain chords, and you couldn't play a certain sequence of notes and you couldn't use an unusual time with the drums. Everything had to be 12-bar and even the blues men hate that themselves. They never stuck to that. Like Junior Wells and Buddy Guy used to have a kind of soul influence.

“Muddy’s changed in his day from country blues to electric city blues right up to what he's doing now, which is ordinary blues. B. B. King has moved on through big bands and at the moment he's doing things with strings.”

“No. I'm a bit biased against strings. They’re too lush. I like the raw sound.”

Gallagher has always been hailed as an anti star. His appearance, and lack of pretension have something to do with this. There is no management barrier around him to keep away Press, hangers on and other assorted rock strays.

Does he have anything against the show business side of pop?

“For some people it's all right because they carry it off. But if you want to keep your feet in music it's very hard to blend the Judy Garland image with the music. That's the way I see it.

“A bit of image and a bit of stardom is all right, but I think it's got out of hand. A lot of guys see themselves as movie stars as opposed to musicians and that's dangerous. Music starts dying when they're wrapped up in what they are going to wear at such and such a do.”

“He's an exception. He's made an art of it, but there are few people like that. But maybe we're generalizing too much. There aren't that many people who take the show business thing so seriously.

“I'm not anti-star. I don't mind being a star of music. But that doesn't mean I have to eat, sleep and shave in front of the public and impress other people that I'm a star. You're only there to be a star musician. Too much of that early stardom can kill people. It saps the musician's will to go on.”

What were Rory's reactions when he was voted high in guitar polls?

“It was all right. It was nice for people to take out the time to vote. But it's not the end of the world or the start of the world. You don't ponder on these things. There are more important things than being voted number one. Music should be a long career. This year isn't important. The next years are.”

Does he see himself playing in 20 years time?

“Hopefully. I pray that I can keep my health and my energy. I`d love to be playing in 20 years time. Why not? Chuck Berry does it. Freddy King does it. I like to see the old guys play. You ought to see the energy of Muddy Waters. He's 57 and he's got more energy than some of the guys I've seen around.”

I suggested that blues musicians have a longer life than pop musicians. After all John Mayall is approaching 40.

“Yeah, he's tired. He says he doesn't want to play but he'll have to get back on the road because that's where his music develops. It's true you probably have a shorter life if you're a pop artist. You have two or three trendy singles and you're the rave of the nation for a few months. Then you run out of tricks and it's all over and you go down and drink yourself to death in a flash club and that's it.

“That's a cruel way to look at it, but essentially that's what it's all about.”

Did Rory dislike the business part of the music business?

“It has to exist otherwise we'd be playing in fields. Someone has to organize it. It's just that in previous years artists were exploited beyond the point of no return. It's cleaned up a bit now that artists know a bit more about their own affairs.

“I don't have a manager. Maybe if I found the right manager I'd have one. If enough musicians rebel against all these business people they won't get hung up as much as they do.

“But then of course some people will say, ‘Oh, he's an egomaniac’. There's nothing wrong with knowing what you want to do. You don't need someone to tell you, ‘Hey, Rory, you shouldn't appear on ‘Top Of The Pops.’ I know that.”

From NEW MUSICAL EXPRESS  March 17, 1973 Thanks again to Brenda O'Brien for finding and typing this article! reformatted by roryfan
246