He came for just five weeks, and ended up staying three months. If he ever makes it in America, in a big way, which he may well do, that might serve as a kind of testimony to his appeal. 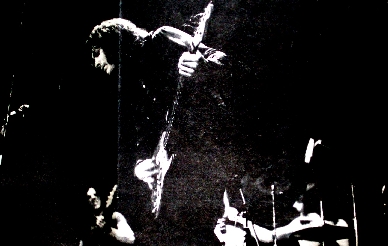 They liked him here. They must have done. But why exactly? He's not a guitar virtuoso, but then he's never really said he is. He sings okay, but the voice isn't memorable.

As for writing ability, he's composed nothing to stir the mass imagination. He's not even fashionable: no dramaturgy in his act, no dressing up; just a few puddles of sweat, hair shaking like a tossed salad, and levi from head to toe.

But say what you like about his merits, there's an unquestionable sense of the unique about Rory Gallagher.

I was sitting in the bar in the Ramada Inn on Eighth Ave. when he entered. He was wearing a vest and a denim shirt, not even faded. He looked just the same as on those occasions I’d seen him at the Marquee. We'd never met before.

"Didn't I see you at some festival in England?” he inquired straight off. I regretted that he hadn't. He was just being normal and friendly... After I’d spent a couple of hours with him I figured that was exactly what he was: very normal.

I think Rory, the musician, is inseparable from Rory, the man, and the man represents those qualities, of honesty and straightforwardness, with which show business has never particularly wished to associate itself.

Moreover, in expressing these attitudes, he's not dogmatic. He's unpretentious, in fact, to the point where his critics describe him as dull.

Yet his admirers find this air of normally attractive. He gets up on stage and does it, but what's more he's seen to be doing it - to be working for his audience without recourse to the props of image, of attitudinizing, and stage theatrics.

He's a hangover from the heyday of the white English blues bands: little style, but lots of gritty effort and determination.

He draws his following from those who like their music to be basic and unadorned. They probably include a good percentage of those English guitar freaks of the sixties, but there will always be a place for a guy like Gallagher, who wisely never diverges from his audiences expectations of him.

After all, Chuck Berry has succeeded very well on a policy of non adventure.

He understands perfectly the logistics of the business and his own personal appeal. He has no manager, though if it is necessary in the future he'll hire one, and he has no publicist beyond his record company, Polydor.

He has an agent, of course, in England, and during his period in America he employed one in New York who relayed to him the various offers of gigs. His agency in London is Gaff Masters, who also look after the interests of the Faces.

He had a manager, but there are a variety of reasons why he presently chooses otherwise.

"They always get in the way between musicians,” he explains, " unless you have a good one. I suppose in a way I'm cutting my own throat... you can't boast about yourself, can you? I can't phone up a magazine and say. "Rory went a bomb here.”

"But then there are advantages. If I'm doing a gig in town and they say when will you he back, I can give them an answer there and then. They don't have to wait about for it to be processed and condensed and analyzed by a manager, and that means something to ordinary people.

"I don't like that Colonel Tom Parker-type thing, where the artist is hid from humanity. And it makes a musician lazy.

"If you agree to do an interview, for instance, you turn up for it. If you want to give people the run-around being a star, that's something else."

In his own homespun way, though, he is a star. How can we refute the evidence of the polls? When pressed, he still rejects the image of stardom, but he admits, quite proudly, to having no illusions about this ability to draw people to his appearances.

He is, he says, “ no social club guitar player.” There would be no point in him saying so.

"But I couldn't live that star thing 24 hours a day. It's hard enough just to get onstage and play the music without having to be judged on whether I'm a star or thinking about what tee-shirt to put on."

He certainly didn't arrive in the States with a halo of superstardom,  greeted at Kennedy Airport by popping flashbulbs.

He and his four-piece group were touring with Savoy Brown, whose lead singer abruptly quit them. Rather than return to England, Gallagher elected to stay on the basis of the reaction he received and the continuing offers he was getting from promoters around the country.

He has a philosophy on how to make it in America. You either spend a million dollars on ads- "Rory Gallagher at Madison Square Gardens" ( where in fact , he played down the bill from Faces) - or you begin in clubs and build from there. But he has no desire, he says, to make one big killing at the Gardens and then return to a mansion with 16 dogs.

That's being a star. Why should he employ a guy for setting his alarm clock, say, when he can do it perfectly well himself? He would just be embarrassed.

He sighs. We are sitting down over a meal in this modest hotel, for which he subsequently pays. He has an ideal, he explains of what the music business should be; he would dearly like to keep it  at the level of the school hop.

"It's the fun the musicians have. It's a serious gig, but you don't take yourself too seriously. I loved that audience thing playing gigs at school hours. It's before the business sticks its claws in and drags you apart. It sounds kind of pious, but honestly.. ." he trails off.

"I think there are plenty of people who feel like that. I think McCartney, maybe, had that attitude; he wanted that. It's an anti-space thing, but I don't think it's living in the past.

"You see, a lot of people,  knowing this attitude, probably don't think I'm as important as this. I think sometimes writers believe that if a guy isn't jumping off a chandelier he has nothing to offer."

The conversation comes around to the subject of singles records. He becomes adamant. He will never make one, he says with finality, and he'll never be seen on Top of the Pops either.

"I think singles are the start of the end."  "Oh, I know," he adds hastily, " all the good points. I know that even Muddy Waters and B.B. King have made good singles, and it would turn on a lot of people who wouldn't do so otherwise, but it's just all the stuff that goes with it.

"It's the Top of the Pops system and I just wouldn't do that."

I suspect there's  strong vain of shrewdness behind this attitude as well as a genuine distaste. Led Zeppelin have never done Top of the Pops either, and it's been a factor that has strengthened the bond of identification between them and their audiences.

Rory says all sorts of people come to see him, from the suits and ties and those interested in in folk music to the 14-year-olds. A proportion of them, he agrees, are probably still hung up on the blues idiom. They come to hear his early songs and some of the Taste numbers.

He smiles. People got very hung-up on the Taste. Critics, especially.

"They thought because I wore a pair of jeans and was a guitarist....ha! But I see the humour of it. I see the everyday sense of humour. There were those who thought we were the new Cream, which we were not.

"If we'd been different people it could've been as big. All the same, I think we were bigger than people said we were."

He seems wary of being labeled a super guitarist: he doesn't want to be though of primarily as a guy with an axe in his hands. The singing, the writing - they have to merge with that aspect. He doesn't think of the guitar as totally divorced from the rest of his performance. He wouldn't  be happy just playing  the instrument all night.

I ask him, though, who first turned him on to the guitar.

" Lonnie Donegan," he says swiftly."  You could actually hear him play it. Elvis just had it round his neck." Ah, the old days.

It's clear that the plug has been pulled out on all those English blues bands. There are enough guitarists in America to now fit the bill. He's being practical.

"I don't think a guy can live off being a guitar star now. Maybe that whole blues thing was overrated and what went before was underrated. Now it's gone, people are beginning to accept the Shadows for what they are.

"Only a few years ago people laughed at Elvis and Chuck Berry. That's the good thing about time: it lots the truth back into shape."

I press him about his interests outside music. He pauses and umms and ahs "I'm not a great golfer!" he answers at last. "I listen to records — a lot of jazz that's not related to what I do."

Electronic music? That set look comes over his face again. "I don't think the synthesizer is really an instrument. I have seen musicians getting songs out of real instruments much better than electronic ones."

On his next album he will probably use a harpsichord and ‘a bit of organ.’

Strings? "There have been a lot of great records mellowed down to please the producer."

We're winding up. Tell me, I say, about your immediate plans. He looks businesslike.

"Well, we're recording in December, we're touring Ireland and Germany in January, and then we're coming back to do a tour of England — that's on February 1. Then we're...."

Look out America, next time around.


This article comes from the November 25, 1972 issue of Melody Maker.
Thanks to Janet ( Calling Card) for sending it
Thanks to Joachim Matz for sending the photo from the article
reformatted by roryfan
Background is another donman capture from  Montreux 1979 mutated by roryfan

The autograph above is from the 1978 UK Tour program
owned by Julian from Australia
THANKS!!