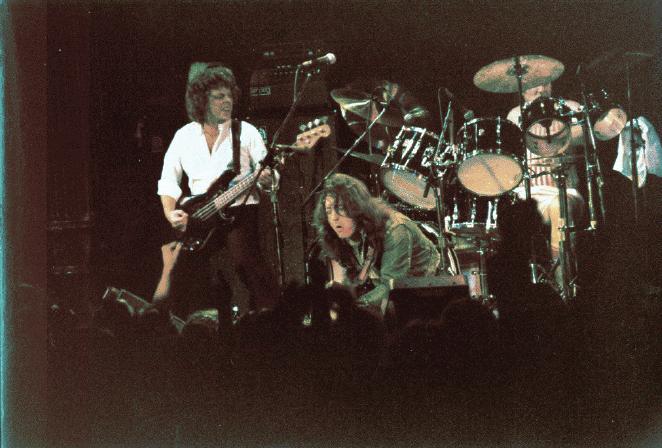 An interview with Gerry McAvoy and Ted McKenna was not available in our area.
Although six years old, it's new on the continent

Radio 1: How was the gig in Galway ?
Gerry: Very good

Radio 1: Did it start off immediately, like the other Ireland gigs ?
Ted: The reactions are similar, although there is a slight difference with Belfast and Dublin for instance.

Radio 1: Is there a difference between this tour and other tours in Ireland, Gerry ?
Gerry: I think it is one of the best tours I did with the Rory Gallagher band.

Radio 1: This time you dont have a new album to promote.
Gerry: No, thats why Rory wanted to play in towns like Cookstown or Newry, where we didnt play for a long time.

Radio 1: Gerry, is there a difference between the bands in 1980 and 1974 ?
Gerry: For sure there are a lot of changes and there is a lot of development, but I still like it.

Radio 1: I recently heard that the Rory Gallagher Band is the second best selling artist from the Chrysalis label.
Gerry: The band is well known in Europe, in England, however,  we havent reached super star status yet, although Rory has a loyal group of fans in England.

Radio 1: Ted, when did you join the band ?
Ted: About two years ago

Radio 1: How many records did you record with Rory ?
Ted: Two: Photo-Finish and Top Priority.

Radio 1: How did you join the band Gerry ?
Gerry: I played in Belfast with a band called Deep Joy and we played as opening act for Taste during an Ireland and England tour. Deep Joy split up at the same time as Taste did. Rory called me, we made an appointment and we've played together since then.

Radio 1: Does Rory like to release singles ?
Ted: He is not really interested in promoting singles, although recently Philby was released as a single. Unfortunately it wasn't successful.

Radio 1: How did you became involved in the band, Ted ?
Ted: The Sensational Alex Harvey Band had split up and it was Alex Harvey himself who told me that Rory was looking for a drummer. I thought that sounds interesting, so I phoned. And since then Ive been a member of the band.