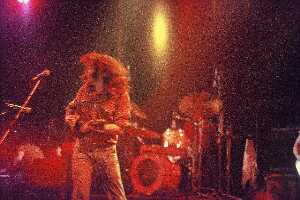 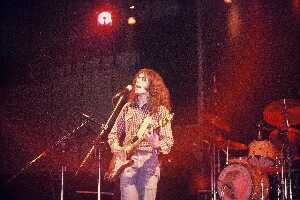 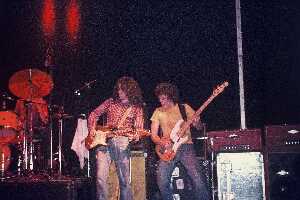 Rory Gallagher seems to be intent upon setting some kind of record for the world's most ballbreaking tour schedule.  He's recently clocked up 100 concerts in 65 cities in 12 countries in 16 weeks.  (Can't be bad, as Jimmy Young might say).

You'd think, therefore, that he would deserve some kind of sympathetic treatment from the old hand of fate.  He's enjoying nothing of the kind, of course.  After his recent gig in Glasgow, he and his compatriots retired to their beds at the Albany Hotel at a reasonably modest hour (with a good book and a crate of Guinness).

At 4:30 a.m. several members of the tour party were stirred from their blissful by the gentle hammering of the Glasgow Drug Squad on their doors.  Gerry McAvoy, Rorys bass player, was one of those forced to stand freezing in his jim-jams as the chaps from the DS turned over the rooms.

The DS had been keeping a close watch on the band as some roaches had been discovered in an ashtray in a hotel in Edinburgh where the tour had been billeted some days before.  The cops had made the obvious equation between a rock band and illegal substances (although there was no concrete connection).  The Glasgow DS found nothing illegal during their search, but took down a few names and addresses to keep their hands in, as it were.

It was pretty alarming, reported one of Rorys sound crew, Jonathan Ginger Glinos.  There was this banging on me door.  I thought it was breakfast.  I opened the door and the next thing I know I'm in an episode of the Sweeney.

Rorys troubles didn't end there either.  On Monday, his brother-manager, Donal, had his maroon Aston Martin DBS  (Registration GLY 100J)  nicked from outside his home in Fulham.  Rory was most perturbed.  All his dirty washing was in the back of the car, waiting to be taken to the launderette.  If someone comes up to you in the local and offers you as a rock n roll memento the dirty underwear of an Irish guitarist, could you please call Shaw Taylor at the Yard.  The usual number.

All photos by Jos Remans from Rodahall Kerkrade, Holland March 25, 1976
Thanks!