Somewhere there lives an architect known as Civic-no first name, just Mr. Civic-who designed every municipal auditorium in America and affixed his handle. The San 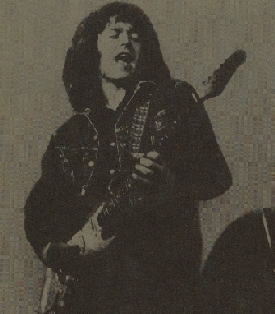 Jose Civic is bigger than some and smaller than others, but shares with all the hardwood basketball floor, the steeply raked cul-de-sac tiers of wooden-backed seats, the bas-relief shields of polis flanking the stage.

On Saturday, November 15th, Rory Gallagher and his band burned away the old library mustiness of the San Jose Civic with two hours of highly heated rave-up. Several thousand young and eagers, celebrating California's impending marijuana enlightenment in a haze of fumes, came out well-shook and baked in the blues.

While ticket buyers outside lined up in the rain three hours before show time and sound men inside ferried instructions the court's length from their control console to the stage, I talked briefly with Gallagher in a bare backstage dressing room.

"Records were hard to get," Rory remembers about his Irish boyhood. "I had to depend on the radio. There was just enough blues to live on.”  What he couldn't get by ear, Rory absorbed through his eyes. "I would check out books on Woody Guthrie from the library.” Today his favorites are "Little Feat, John Hammond, Tony Joe White, old rock & roll, Doc Watson, too many others to name.” He still recalls the traditional music with which he grew up. "Those Irish songs were a good background for me. I was impressed by their descriptive settings and humor.”

Casually dressed in red, low-top tennis shoes, a checkered shirt and jeans with deep tool pockets, Gallagher is unassuming, even shy. As he leaves to ready himself for the show, he says that the band has toured troubled Belfast and Ulster regularly without incident. "Knock on wood, of course;' he adds, smiling.

Promptly at 9 :30, bassist Gerry McAvoy, organist Lou Martin and drummer Rod de' Ath sidle up to their instruments. Rory bounds front and center to join them and gives the crowd a thumbs-up salute.

Everyone stands as Gallagher drives straight and hard through a mix of standard and original rock numbers, from "Let Me In" (from his new Chrysalis album Against the Grain) to an old Muddy Waters number, "I'm Your Doctor.”

The solo pieces, with Rory on National steel and acoustic guitar, rival jet trails with the high, soaring sound of his well-worn Stratocaster. Only on Leadbelly's "Out on the Western Plain" does Gallagher, beset by feedback, sound tentative or thin.

Rory plays a blues with more pleasure than pain. "My baby left with the garbageman, she better come back quick and empty my garbage can,” he sings, with great glee for the messy double-entendre, then throws back his head and shouts, "Can you hear me, Mr. Bartender, take my advice, open up the Johnny Walker and forget about the ice.” Martin paws at his keyboard, accumulating massive peals of uninterrupted sound, while Rory stoops down low on the neck of his guitar and trades rapid, ratchety riffs with McAvoy. The bass player leans into the balls of his feet like a stand-up sprinter on the starting line.

For the finale, Rory crawfishes madly from the mike, stretching flat the coils of his guitar's extension cord. He gyres into the drums, wraps the snaky cord round his waist and sends de' Ath's bass mike flying.

The crowd thundersteps for an encore. Mr. Civics' walls weren't made for this much shaking.

From the December 8, 1975 issue of circular , a  publication from Burbank, California