RORY GALLAGHER
"AGAINST THE GRAIN" 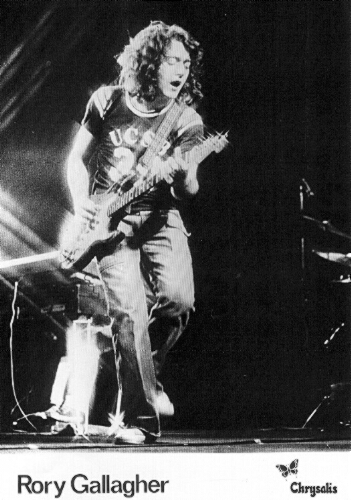 Rory Gallagher's first album for Chrysalis "AGAINST THE  GRAIN" is out on October 24th.

The album's release celebrates a major signing of an important established artist to Chrysalis Records. Rory's career has already been long, by rock's standards, and he has enjoyed worldwide success. The recent Melody Maker Readers Poll reflected his continuing high status pacing Rory 5th in the International Guitarist section. He produced six albums for his previous label spanning his first band, Taste through his solo career to the highly acclaimed "Irish Tour '74' album and film. (Tony Palmer's
(Britain's leading rock film maker)  impressions of that tour are still to be seen in cinemas all over England). The film, itself, captures Gallagher at his best, on stage in front of an audience. This is where Gallagher's reputation has been built. His appearances are marked by incredible audience rapport. He is one of the most exciting performers in contemporary rock as a large and devoted following will testify.

Born in Ballyshannon, County Donegal, he moved at an early age to the town of Cork in the South East of Eire and regards that as home. He has been playing guitar almost forever. He was bought his first real guitar when he was nine- it cost £4.50. It replaced an earlier plastic model from Messrs. F.W.Woolworth, on which he had delighted friends and relations with renditions of hits by Gene Autry and Rory Rogers.

At school, he formed various groups, playing socials and school concerts. This went on until he was fifteen. "Even then," says Rory, "I wasn't fond of showbands, but promoters thought you had to have fifteen members before you were a proper group, which meant that my groups didn't get  any work."  So he joined the Fontana Showband, later renamed the Impact, with whom he spent two and a half years.

"We played all over Ireland, toured Spain and did a couple of English gigs, and it turned out to be great fun. We were luckier than most showbands; the drummer wanted to do Jim Reeves stuff, but the rest of us wanted to do "Nadine", "A Shot Of Rhythm and Blues", all the good, gutty numbers."

Lonnie Donegan was Rory's first real hero -"he really tore those songs out of himself" -to be followed by Eddie Cochran, Buddy Holly and Chuck Berry. When the showband broke up, he got the chance to play hard rock exclusively; he, the drummer and bassist, went over to Hamburg in Summer 1965. Back in Ireland a few months later, Taste was born. "We played around Ireland, did another trip to Hamburg, then finally made the big step over to London in 1969. "

"We came in May on the strength of a promise we'd had from the agent who fixed our German gigs, which didn't work out, but finally I changed the line-up, bringing in Richard McCracken and John Wilson, we did an audition and ended up with a recording contract with Polydor."

Taste made two albums, called "Taste" and "On The Boards" -the title being a reminder that Taste had built up their huge following entirely on the strength of their volcanic live appearances -and shortly after the band finally broke up, "Live Taste", recorded at Montreux, was released and made the charts.

With Taste behind him, Rory spent the early months of 1971 laying the foundations for a new band to continue where Taste left off. With fellow Irishmen Wilgar Campbell on drums and Gerry McAvoy on bass backing Rory, he made his first album at Advision studios. With Vincent Crane of Atomic Rooster playing piano on a couple of tracks, the album, simply entitled, RORY GALLAGHER  gave a wider picture of his talents than previously. Taste's asset was its ability to generate on enormous physical excitement, to which  the new album added depth and subtlety.

Two more albums followed with Rory, Wilgar and Gerry -"Deuce", and "Live In Europe", and it was the latter which at last brought the giant breakthrough in record sales.

The band first visited America in Autumn 1971, and although well down the bill, gained a tremendous reaction. His return trip in Summer 1972 consolidated that success.

In June 1972 Wilgar Campbell was replaced by Rod de Ath.

Asked if his music has changed, Rory says, "Certainly, but for better or worse I'm still recognizable. As far as style goes, I don't like playing twelve bars all the time -the blues field goes right from Charlie Patton to Lowell Fulson, and my aim is to play the blues well and feel them properly."

"Basically, I like anything with guts -Leadbelly, Big Bill Broonzy, Woody Guthrie, Johnny Winter, the Stones, who sometimes don't look it, but who are so far ahead, and John Hammond, who I think is the best white blues interpreter -one of the few who've stuck to the straight and narrow.

"When I listen to something I like to be taken out of my seat and thrown across the room. I like guts, a good drive, which can include gentle stuff too. Whether it's authentic or not or any other thing, if it sounds good and feels good, that's it."

The band lineup remained stable from June 1972 and released "Blueprint", "Tattoo" and "Irish Tour '74" and played to people worldwide. "Live In Europe" achieved gold status for sales and "Irish Tour '74", his last album and a double, was awarded a silver in the U.K. "Against The Grain" is his first album since "Irish Tour '74" and right through until the end of the year Rory will be touring and playing material off the new album, from Manchester to Los Angeles.

The new album was recorded in England during September 1975 at Chrysalis's Wessex Studio, London.