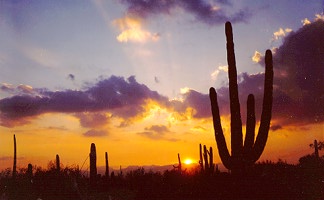 Hanging out with Rory in Arizona, 1985
by Roger Wrobel

I met Rory before he performed in a club outside Phoenix in Tempe, AZ in 1985 at a club called 'After the Gold Rush' (later called Dooley's).  I went into the back of the club in the morning hoping to catch a glance of the equipment or meet a roadie. As I walked up the loading ramp and into the backstage area, I saw someone with unusually long hair from behind and Rory turned around.  I just walked up dumbfounded and said, "Rory."  He looked at me with a styrofoam cup of wine and started conversing without a hint of celebrity.  He asked me about Arizona, the wild west, and Indian tribes.  He was lamenting not getting to see historic Tombstone, since he would be playing in Albuquerque the next night.

Somehow we got into a discussion about politics, and it was obvious that he was not afraid of expressing his disdain for then president Reagan and Margaret Thatcher.  He and I agreed it was wrong for Reagan to mine Nicaragua's harbors and he expressed his frustration with how one-sided the media was regarding the IRA.  Rory said he had friends who were members and that, "they aren't all assasins."

He changed his beverage to straight vodka and went on to the music business. "Can you believe how popular Michael Jackson is?" he asked.  I told him I was less impressed with commercial music and he asked me if I played guitar.  I said, "very poorly."  He said he wasn't fond of heavy metal, which was very popular in Phoenix.  "You start singing about devils and setting off smoke bombs and I just want to play blues.  He smiled and shrugged and said he really liked Bruce Springsteen as well.  His temperment changed with the mention of U2. "I remember them when they were kids who'd come and see me," he said rolling his eyes, "now they're rock stars, you know, too busy for me."

I tried to ease his mood by telling him I bought 4 tickets for the show and had him autograph my Jinxed album.  He noticed a corner of it was cut, he smirked and said, "it's a cut-out."  He had Gerry McAvoy and Brendan O'Neil sign it as well.

His brother Donal talked to me too, telling a funny story about visiting with Neil Young.  Rory said Neil always insisted on seeing him whenever he was in L.A.

By now he spied a bottle of Mexican brandy and opened it with a sly remark about, "never have seen that before, let's try it!"

We talked a bit more about his songs and recordings before I had to leave.  I said I liked the production on Top Priority and he asked what I thought of the production on Jinxed.  I said it wasn't as good to me.  He shrugged as I departed and exclaimed, "Well, you're entitled to your opinion."

That night he brought the house down, the place was packed and he played as if he was determined to give every single person in the audience the show of their life.  The songs I remember the most are Off the Handle, Bullfrog Blues, and his acoustic Banker's Blues.  I've met many famous musicians, but never one with the graciousness and unpretentiousness of Rory Gallagher.

Here's to you,
Rory!