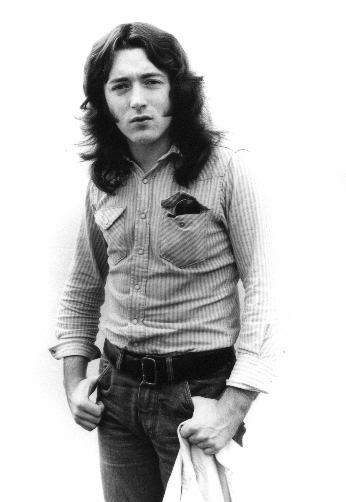 Rory Gallagher, just back from America, sits in this record company's offices sipping Scotch and reflecting on the qualities of this native Poteen. Teetering on the brink of superstardom, Rory is vehement in his opposition of that whole idolisation syndrome.

"If you wake up one morning to find you'd been crowned a superstar, it would seem you've got to go out and change your style of dress and living," he looks down at the denim shirt, fresh from his flat in Earls' Court.

"Being a superstar musically is half acceptable, but it's better never to have made it or be forever on the verge of making it musically. That way it keeps that enthusiasm in you."

Since Rory split from Taste just over a year ago, his career has climbed steadily upwards. Going from a group to a solo entertainer with just two backing musicians didn't hold the fear for him that it does for many solo breakaways.

"I'm much happier out front then, it depends on your frame of mind, some people are born to be out in front, some to sit at the back. When I started as a kid , I was on my own. If you're confident enough with you own material, then fine."

"Of course, a lot if people say 'big head' but in that case you'd never have had people like Dylan or Chuck Berry. You're born to do a job and that's it. I never question it or think when I'm onstage "heavens, what am I doing here' the same as the person who stuck the label in this bottle of Scotch didn't sit there thinking 'what am I doing with this label, why am I doing this?" he just did it.

Reaction to Rory's recent American tour was good - it was the first solo tour he'd done and only his second visit since Taste toured on the Blind Faith bill. " America has lost its amazing appetite they had for European groups, but then I never had the urgent panic to make it there that other people had, even if I make it there over a period of ten years, I don't mind.

" Often over there, they're more interested in the way you dress and the mystique you put over, than the way you play. They were hoping to see fuzz boxes and wah-wah, so they were rather suspicious of me."

Rory has just released his second album over here, and hopes to start on the third round about January and also do a live one sometime. The second album contains quite a few acoustic and mandolin numbers and Rory likes to do a few acoustic numbers onstage.

Rory first learned to play an acoustic guitar when he was nine, and his Fender Stratocaster, which he has used for nine years, was only the second electric guitar he ever owned and took  him years and years to pay for. 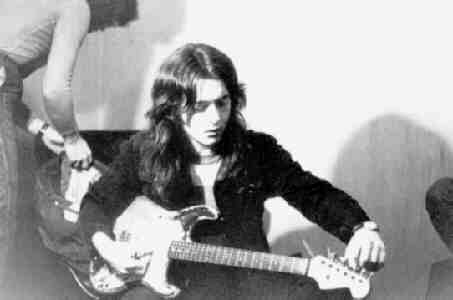 "It was the guitar I wanted when I was a kid because it was the best electric guitar and Buddy Holly had one. After I got my first electric guitar, I took a chance and got the Fender, and I'm still happier with it than any other guitar."

His mandolin he got from a pawn shop for £3 and restrung himself. He's tried using it with an electric pickup, but found it ruined the sounds quality, so now uses it acoustically.

Rory and his band do rehearse quite frequently and Rory is always strumming his acoustic guitar at home.

"Say you had a week off and you don't play, you could get really rusty. It's a bit like an athlete, you have to run every day. The same applies to classical guitarists, if you don't play for a few days, the ideas store up and flow out."

Rory writes with guitar, but wishes he could play the piano and read music as it would make the whole process much easier. As it is, he makes up his own method of writing music round one line.

Generally he is pretty pleased with the way his career is going.

"Occasionally I say it would be nice to have another guitar player or piano player or brass, but I don't mean it. I like a big sound from a small band. I don't like people standing around waiting to bash a tambourine. I like everybody very busy. My music doesn't lend itself to big bands. I wouldn't be against bringing on a big band just once in a while."

Compared to Rory Gallagher, self-ostracised guitarist of a year ago, he is outgoing, confident and positively verbose. If Taste is mentioned, he flinches and says they're good musicians, they'll make it. Gallagher is a long, long way from stagnation.

This article comes from the Dec.18, 1971 issue of Disc & Music Echo
Thanks to John Wainwright for sharing it
reformatted by roryfan
The photos?...'borrowed' from somewhere....THANKS
144