Rory Gallagher
A Question of Taste

Rory Gallagher has a new (as yet untitled) album currently in production: and of course there'll be a UK tour to follow its probable September release. He's not best known for the use of copious effects - but effects do have a place in his sound, both live and on record. He took time out from the studio to talk about the effects he's been using and how they help him achieve his sound. 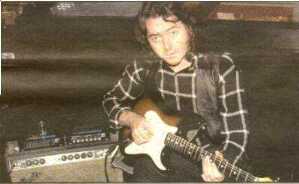 'Especially live, you want the right sound at the right time.  Effects are ideal for making a solo really happen, particularly if you don't have your regular monitor guy there. Even though I like a fairly pokey amp behind me I do like to have a monitor mix as well. In that situation it's better to press a button and get an improved sound than to have to try shouting over to someone on the monitor desk who's never heard your material before to get the guitar level boosted halfway through a lead break. Doing it by pressing a pedal helps to avoid on-stage friction.'

In fact control of rather than alteration of his sound seems to be one of Rory Gallagher's main reasons for using effects.

'Generally, I'm not over keen on rack-mounted gear. There's enough to do on stage without having to peer at LED displays, and anyway , I'm one of those guitarists who's always a little insecure about going too far electronically. However, one exception is the ROD-20. I have used a wah-wah as a tone control- not pedalling it, but using it to set the mid frequency for solos. The trouble is that you encounter the gypsy factor -either you get it right or you don't. There's no second chance. With the ROD-20, I use settings 1 and 2, patched in from a remote footswitch, to work on the midrange rather than the fuzz setting - there are a lot of midrange possibilities from the equalizer section, particularly with a single coil pick-up on the guitar.'

How are effects used in his records?
'In the early days I never used echo in the studio. I had a phobia about it. Bit by bit, I started using tape echo and so on. Now even when I'm recording I won't put the guitar down completely dry. I use a little tight delay or slapback echo. It saves a lot of time later . I used to get into arguments with engineers when I wanted to put on some flamboyant echo at the mixing stage, and I started thinking, "Why don't I just start off by using the effect in the first place-."

'If you get them set just right they can inspire your playing, but I don't use that many effects. About the first one I got was the Boss BD-1 Driver, which I still use. It's a big green box (rather like the old Boss CE-1) with three settings: Distortion, Fuzz, and a third which is almost straight -a plain graphic and overall volume boost, which is the setting best suited to me. It can really change the character of your guitar.'

What is the current effects line-up?
'That all depends on the circumstances. I use some slapback echo and the RGE-10 graphic to help the amps out. My favourite Boss effect is the Octave divider -the OC-2. That's great, even with slide, for which I tend to boost it with the compressor .

'Compression is used all the time. It helps when, like me, you use very long guitar leads; a subtle setting is essential, of course. I don't use chorus -I prefer flanging (I use the BF-2). Anyway, I'm currently running in mono on stage so I don't really need stereo effects. The other thing I particularly like is the Boss Vibrato pedal (the VB-1)- it's different from tremolo proper and I use it rather than a tremolo or flanger (which would be a bit of a compromise) when I want that Bo Diddley type of sound.'

For all of his attention to the fine details of his sound Rory Gallagher insists that he isn't a programmer . He's a guitarist and proud of it.

'I have got a Boss ME-5 -the programmable effects board. I know what it will do and what I want it to do, but I don't actually bother programming it. I leave all that up to an engineer. I've never really been into programming, but I'm learning.

'The BE-5 is another matter. You just set it up as you need it. I'm enjoying using that in the studio because it allows you to work at the sound as you go along.'

To listen to his music you may not think there's much happening in the way of effects -but that's exactly how he wants it.

'I'm not an effects wizard like Dave Gilmour -a player who uses effects superbly,'

Rory Gallagher is like that- unassuming, modest, never over-the-top. It's all down to taste.

'For me the perfect compliment is "It doesn't sound as if you're using anything. It sounds as if you're plugging straight into the amp", That's when I know I'm using the effects correctly.'


Of course the 'as yet untitled' album that was is production was Fresh Evidence.