I would like to comment on the sad passing, at the age of 46, of Irish guitarist Rory Gallagher from complications following a liver transplant. His musical mix of blues, folk and Buddy Holly never found wide acceptance in this country, but constant touring with his group Taste and later on his own earned him enough recognition worldwide that he had kept playing and recording for over a quarter of a century.

I only saw Rory perform twice, but both occasions were extraordinary. The first was in a large club on Long Island about 1975. I was aware of some of the Taste records, but was totally unprepared for the live show. He sort of shuffled out in plaid shirt and jeans, plugged his Strat straight into a Vox AC-30, tuned on stage in about a second and off we went on a 3 1/2 hour roller coaster ride that touched all the musical bases he loved. Rory knew that Strat so well that they seemed to become a single entity on stage. The variety of tones he could wring out of that guitar was amazing. He didn't seem to use the Strat in-between tones, yet you would swear his guitar had at least four pickups. Crying swells with the volume control, wah-wah with the tone control, playing behind the nut, picking over the fingerboard and popping harmonics -Rory could make that Strat talk. Mind you, none of this was done with any "Guitar Star'; flash. They were just tools he integrated into his playing. He didn't switch guitars for slide -he just played slide on the Strat in standard tuning. 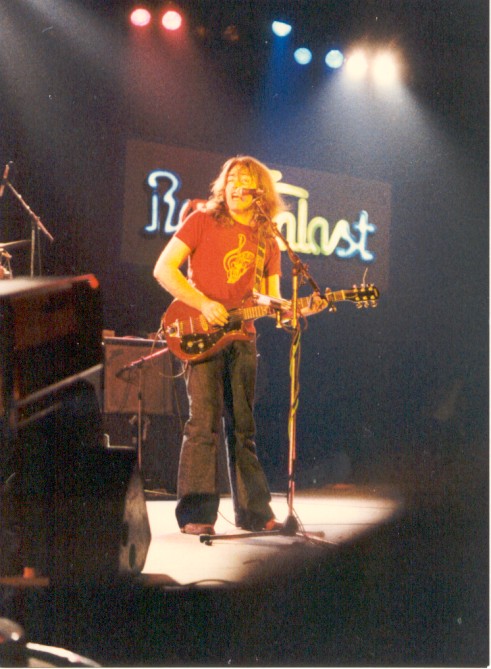 The Strat itself provides an interesting story. Purchased in 1961, Rory said it was the first Stratocaster to reach Ireland. Supposedly, the man who ordered it originally didn't like the sunburst color and passed on it. Young Rory had been making time payments on a cheap guitar and was able to persuade the shop owner to switch the payments to the Stratocaster. He has had it ever since. Although teased over the years about the condition of the instrument, he insisted it was never abused -just used constantly.

About four years ago, Rory was in Manhattan for a gig and I figured I would go see what he was up to. Although he was looking as weather worn as his Strat, he just rocked the joint: The place was absolutely packed with 25-35 year old Irishmen, each with a beer in his hand and cheerfully singing along to every song in his 25-year repertoire. Rory played with such intensity that it took my breath away and left me with the same stupid grin I had after the Long Island show 20 years earlier. I remember thinking, "That's it! -that's the real deal." He was a man who let his music do the talking. I will miss him.