And then at the suggestion that it was McCracken and Wilson who suffered the split... "Yeah, but the thing is, they formed another band called Stud and went on to do different things. It depends on your commitment, your luck; and splits do occur. It's just that some seem to be more traumatic than others and people take them to heart, you know. I mean, no one wants to split up, but sometimes it just happens."

He moves on to discuss the way his music is going now, and responds to an accusation of Motorheadness, "Ah well, I'd be worried if I was bordering on Motorhead. See, you're always caught in a dilemma. You write contemporary material that comes under a Rock banner. I mean, everyone knows I'm a Blues fanatic beneath all that, but I also have other influences, like slight Folk influences, and I'd never write a whole album that's Hard Rock.' Then again, I don't do full Blues albums either, because it's hard to get a classic format on any album. So every album goes right across the rainbow from very Hard Rock to things that are more R & B. But I don't  intentionally try to be heavy metal. Its not my style at all, but we have metal fans, which is OK; but we're not a leather and chains outfit. But if you're going to Rock, you might as well Rock Hard. I don't like soft Rock, y'know."

A question of influences brings up Blindboy Fuller, Leadbelly, Muddy Waters, and Jerry Lee. "Well, the people you've mentioned, I regard as my influences and idols. But I'm influenced by contemporary people as well, and the groups of the sixties when I was growing up and so on. But Leadbelly, and the legends of Rock and Blues, inspire me because they weren't flash-in-the-pan type people, and it wasn't a pop success they were after. Their music was their lives for fifty years, and they were more Folk musicians in a way. They weren't just in for the big kill and out again. It was a long lifetime work, do you know what I mean, and that's why I like them. They're not on top of the pops today and gone tomorrow. Their solid craftsmen and do it for a long time."

The non-replacement of Lou Martin, and the missing Blues link arises. "I've been answering the Blues question for over ten years now. The thing is that I'm playing as much Blues now as I was ever. Just because you haven't a piano player doesn't mean you're no longer a Blues player, y'know. Having keyboards is a great advantage sometimes, but on the other hand, you go through phases where you're not that keen on it. You prefer the more rootsy sound of guitar, bass and drums." 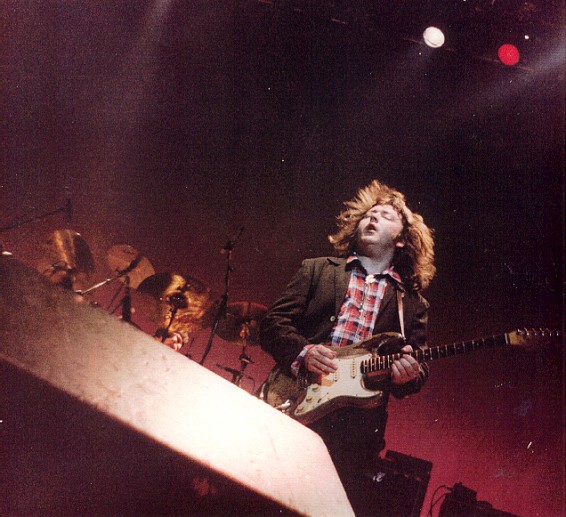 But you still use saxists? "Oh yeah, like in Lisdoonvarna, we had two saxophones for some of the songs which is quite Bluesy. On the last American tour we had a keyboard player called John Cooke, but that was for that tour alone. I find there's more rhythm and syncopation with just the trio, y'know? And then if you add saxists, its nice. But Lou Martin, I've great admiration for, but after five years  playing with Lou, I'd be forgiven for wanting a change."

Rory ponders the difference in success between Europe and America. "Well, Europe isn't just one huge nation. You go to America and tour for ten years, and still not cross your tracks. In Europe, luckily, bit by bit, we got various countries won over, and being a European myself, you're working form a home base."

And maybe he relates better to the crowd. "Yeah, but by the same token when we play in America, we do the College Circuit. We do clubs. We've done big Rock gigs as well, but we're not a pop outfit; and we've never gone for the big publicity kill in America. We've done twenty tours over ten years. That mightn't sound like it means anything, but that does stand for something in America. We've covered all the States. We've played very well. We've got a good following. We've done very good, album-wise, but we haven't had the big hit album which would really make pop singles. So it doesn't appear we're as strong in America as Europe, but you can take it from me that we're quite strong there, though it does need a lot of polishing."

He denies any real interest in the opportunity to join the Stones. "Yeah, but all that's hypo- thesis now, do you know what I mean ? The Stones thing was just a recording session, really, for a couple of nights. I prefer to do my own thing. I'm a Stones fan. I was then, and I still admire a lot of the things they do, though." He responds to the suggestion of disinterest in doing further Irish tours. "Not at all : we used to do an Irish tour every Christmas up to three years ago. Then we skipped one year and we did an Easter tour, and the next thing we found was that between getting delayed on albums, getting stuck in an American tour or in Australia somewhere, you've got the cart before the horse situation, d'know? The next thing you realise, three years have gone by. It's not a blunt reason we don't want to do Ireland anymore, or we can't do Cork anymore. That's not the case. We did Punchestown last year and Lisdoonvarna this year. But I think we'll probably do a Christmas tour, because one concert isn't enough. We want to do Cork and Belfast and all these places."

On the pop single question. "Well, 'Philby' was a kind of a single for airplay for D.J., 'Shadowplay' was on a ten inch thing. But we never consciously went in to make a single. I don't dislike it. It's a love/hate thing. The point is that most records in the charts I don't like for a start, and I don't want to be identified with that 'thing.' Occasionally, good records can go in. It's just the stuff that goes along with having a hit record. But if I could take a song, like 'Philby; which I'm proud of, and if all the D.J.s would play it, and it ended up in the charts, that's great on paper. I'd be delighted with that. But than you add on all the other silly bits you've got to do to get the records in the charts."

Unpopularity with D.J.s? "Yeah, and a lot of D.J.s won't touch my stuff with a forty foot pole because they can't programme it... You get played on certain stations and certain programmes, but if you're not known as a pop artist, D.J.s shy away from you for a start, then if you happen to do a track that's over two minutes and thirty seconds, they panic, because these fellas are robots, working like Swiss watches, and they get nervous if it doesn't fit into their five minute thing. So, in a way, you're lost. By the same token, I don't worry about it nights. I'm more album conscious."

Finally, marriage. How does it feel? "Slow to jump the broom, I suppose. Same as every other fella. I mean, what's the rush?"  Is it a case of 'why settle for a crumb when there's a pie on every tour!'? "Not at all... That's a Rod Stewart attitude, y'know what I mean, like! This whole marriage question is a pop star question, y'know. 'When are ya getting married, Rod?; When are ya getting married, Elton ?: You know ? The world is full of people, and certain people marry at different stages but I'm not the jet set type. If you bump into someone, and marriage is the route you want to take; fine, and if not, that's fine too. But I imagine it'll happen along the way."~
MICHAEL GALVIN

Published in the 2/86 issue of Deuce Quarterly #39, maybe originally from Raven 12/84???
Thanks to John Wainwright for sharing it
reformatted by roryfan
143